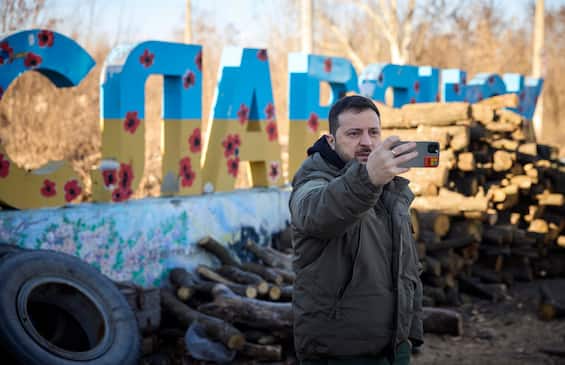 Volodynyr Zelensky made a surprise visit to Donbass, traveling close to the front line on Armed Forces Day, which is celebrated today. The Ukrainian president went to the city of Sloviansk, about 40 kilometers from Bakhmut, the main battlefield in the region. In a video shot in front of the city entrance, the head of state greeted his country’s military “from the bottom of his heart” in front of a large yellow-blue writing with the name of Sloviansk (WAR IN UKRAINE, FOLLOW THE UPDATES IN REAL TIME ).

“I’m honored to be here”

“Eastern Ukraine is today the most difficult front and I am honored to be here now with our troops in defense of Donbass,” Zelensky added. “Next time we will meet in our Ukrainian Donetsk and Luhansk, and I’m sure, also in Crimea,” the Ukrainian leader stressed. Once again, Zelensky visits soldiers near the fighting area, while Russian President Vladimir Putin has not yet done so. The Kremlin leader appeared in a video yesterday as he drives a car on the Crimean bridge, but he has never traveled to the occupied areas since the February 24 invasion. The Kremlin recently announced that Putin will go to Donbass “in due course”.