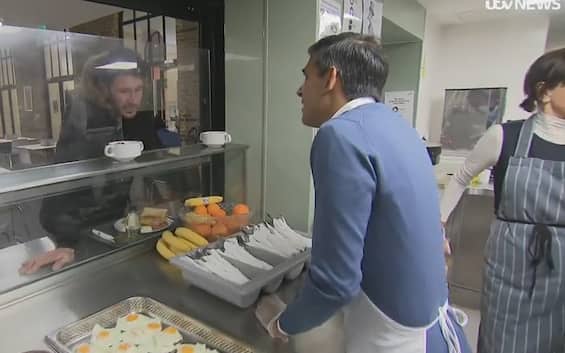 “Do you work in business?” British Prime Minister Rishi Sunak has come under fire in the UK for asking a homeless man this question while volunteering at a soup kitchen in favor of cameras.

The exchange between the premier and the homeless person

The dialogue, which appeared decidedly surreal, took place while the prime minister, a former Goldman Sachs banker and one of the richest people in Great Britain, was serving a plate of sausages, toast and eggs to the man, who said his name was Dean. The exchange began when the homeless asked the premier if he was “fixing the economy.” “That’s exactly what I’m trying to do,” replied the premier. And when the homeless man later said he was interested in business and finance, Sunak asked him if he was in the industry and if finance was something he “wanted to get into.” “I’m actually homeless” was Dean’s reply who then added: “Yes, I wouldn’t mind (going into finance, ed), but I don’t know, I’d like to get through Christmas first” explaining that he hoped that some charitable institution could find him an accommodation for the night so he wouldn’t spend the night of the 24th in the middle of the street.

The criticisms of the opposition

Angela Rayner, deputy leader of the opposition Labor Party, posted a clip of the exchange on Twitter, calling it “heartbreaking”, while another Labor MP, Bill Esterson, called Sunak “out of this world”.