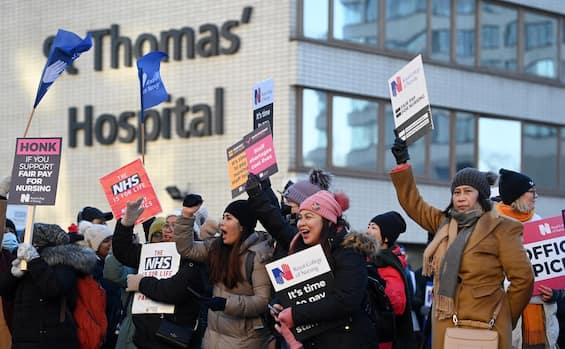 Thousands of ambulance workers in England and Wales are on strike today over the ever-widening UK pay dispute and major hardships are being experienced for citizens needing emergency medical attention. Indeed, as the NHS leaders, the public health service, have stated, it is not possible to guarantee the safety of patients. In the face of the protest that is paralyzing British hospitals, the British Health Minister, Steve Barclay, has urged citizens to “use common sense” to avoid putting themselves in situations that require going to hospital. A concept that was most clearly exemplified by the director of the NHS for England, Stephen Powis, who, remembering that this is the period of the pre-Christmas holidays, advised against “getting so drunk that you have to go to the emergency room rescue: today is certainly not a good day to go there if it really isn’t necessary”.

The health service is insured only for the red codes

“What we tell people is to exercise common sense about the activities they do, keeping in mind the pressure that is on the system,” said Barclay, who however reiterated that he does not intend to move from the position on wages for which the Health workers went on strike. The service is ensured only for calls identified by the red code, which corresponds to immediate danger to life. While for the other cases you have to go to the NHS website.

The reasons for the strike

The protest is due to a wage dispute. The National Health Service (NHS) has asked citizens to call 999 only if life is in danger. In London alone, only 200 of the 400 ambulances in normal operation are operational. And most of these 200 in service are led by soldiers, called by the government to make up for the personnel shortage. Health Minister Steve Barclay said unions had refused to cooperate with the government nationwide on how staff handled emergency calls during the strike. His comments have aroused the anger of the unions themselves. The Unison theme song called it “complete nonsense.” NHS health director Stephen Powis has advised citizens not to get so drunk that they have to go to the emergency room, due to the increased pressure on hospitals. Barclay also accused unions of making a “conscious decision” to “inflict harm” on patients. The country has been grappling with strikes in the public sector for months, from transport to healthcare.