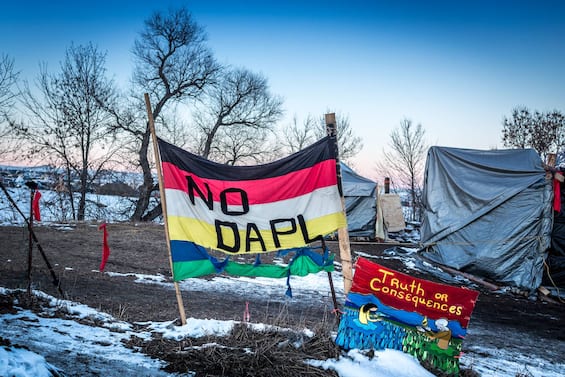 Montoya, along with 42-year-old Jessica Reznicek, broke through security fences, then set fire to some equipment and damaged the facility with chemicals in 2016 and 2017. Reznicek was sentenced to eight years in prison in 2021, after pleading guilty. of conspiracy to damage the power plant. US District Judge Rebecca Ebinger ordered the couple to pay more than $ 3 million in restitution.

The two women’s acts are part of the 2016 protest movement against the construction of the Dakota Access Pipeline, which transports oil from the Bakken Formation – an area on the border between Montana and North Dakota, two US states that they border on Canada – all the way to Illinois, crossing South Dakota and Iowa. The Sioux Native Americans of the Standing Rock Reservation were especially opposed due to damage to important sacred sites for the community and water pollution due to the passage of the oil pipeline under the Missouri River bed.

For the judges it is eco-terrorism

For Montoya and Reznicek, a worsening of the sentence was determined by the application of a criminal law that punishes acts of internal terrorism.

After the ruling, FBI special agent in charge Omaha Eugene Kowel said: “The ruling received by Ruby Montoya sends a clear message that those who commit violence through an act of domestic terrorism will be identified, investigated and prosecuted.” US Attorney Richard D. Westphal also intervened: “The sentence handed down today demonstrates that any domestic terrorist offense will be investigated and aggressively prosecuted by the federal government. The seriousness of the defendant’s actions justified the significant prison sentence imposed by the court and should discourage others who think they are committing such criminal acts. “The increased punishment for acts of domestic terrorism dates back to the Oklahoma City bombing in 1995, after the which Congress has enacted tougher sanctions to discourage acts of “intimidation or coercion” targeting the government or the civilian population. Since that time, the law has been applied almost only to defendants linked to extremist groups abroad such as the Islamic State or al-Qaeda or national extremists like Cesar Sayoc, who pleaded guilty in 2018 to bombing members of Congress.

“Too broad and inconsistent” application of the rule

Following the sentencing of Reznicek and Montoya, some have raised criticisms that the law has been applied too broadly and inconsistently. One case that has caused debate concerns the non-application of the rule to the case of Guy Wesley Reffitt, a 49-year-old Texan militiaman who was sentenced in March after introducing participated in the assault on Capitol Hill, seat of the American Congress, on January 6. 2021, and threatened to “physically attack, remove and replace” lawmakers. Before issuing an 87-month prison sentence in August, US judge Dabney Friedrich refused prosecutors’ request to consider Reffitt’s offense as domestic terrorism.