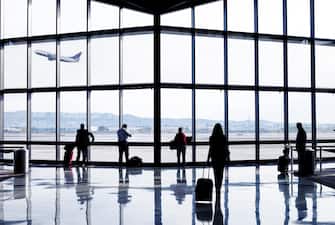 From the US airport crisis an unprecedented opportunity emerges for retirees. In fact, many are called to help airline companiesstruggling with reduced forces due to the mass layoffs of 2020 and the wave of resignations

Record-breaking air transport: from the first half of 2021 passengers quadrupled

Tells the New York Times that “Maria Boyd-Scott, 60 last month, and his wife, Joey Boyd-Scott, 68, celebrated their birthday in style because they flew in business class in Amsterdam, staying at the Hilton for two nights and then they went to France for two nights at the Waldorf Astoria Versailles ”

Airport chaos can cost 1.2 million passengers and 800 million in turnover in Italy

These are not new employees, but retirees. Which have been recycled since “new” experienced workers

They all have salt and pepper hair and are a “new workforce” in old age only because of the benefits this potion offers. These include unlimited travel for himself and a companion

These are free trips to the United States and heavily reduced internationally, says the New York daily – e discounted rates on standby for any place served by the airline

So, thanks to theirs “part-time travel jobs”this is how the new jobs of the ultra-retirees are defined, their trips abroad become ultra low-cost

The travel industry is facing a significant shortage of manpower. In June, domestic employment in the leisure and hospitality sectors fell nearly 8% since February 2020, according to the U.S. Bureau of Labor Statistics, leaving hotels, airlines and other travel operators poorly equipped. to cope withincreased demand

Hence that crisis – which manifests itself with cancellation of flights, terminals full of lost suitcases and reduced room service – is pushing companies to recruit possible employees at job fairs and to sweeten the return to business as retirees with rewarding bonuses and pay

This is also prompting seniors to be considered for positions that are anything but senior. Overall, the travel industry organizations and hospitality are relying heavily on workers and seasonal hires

Airports, biometric recognition is the next normal