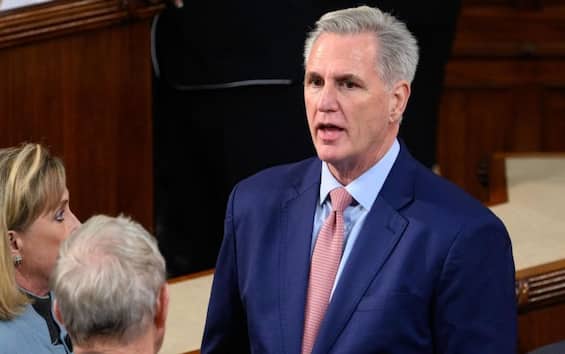 Donald Trump breaks his silence on the election of the speaker of the US House and publicly supports Kevin McCarthy on his social network Truth, rejected yesterday three consecutive times by about twenty colleagues from the more radical and conservative wing of the party.

It hasn’t happened for a century

Failure to get elected on the first try — followed by two more flops — is an embarrassing failure: It’s only happened 14 times in Republican history, including 13 before the Civil War and most recently in 1923, when nine ballots were needed to re-elect the Republican. Frederick Gillett. After a century, same scenario. Resoundingly rejected three times, Republican Congressman Kevin McCarthy is determined to continue his battle to become Speaker of the House. “We will continue to do what we have been doing, talk, and solve the little problems,” he assured reporters.

In favor of McCarthy

Most Republican lawmakers describe themselves as “only Kevin.” “We have to make a choice, do we want to be the party of the 2% of the radicals?” says Congressman Kat Kammack. McCarthy has the support of “90% of House Republicans,” adds another MP, Patrick McHenry. But in the meantime the rebels are not giving up. The clash within the Republican party creates a strong situation of uncertainty, given that without a speaker the Chamber cannot function. McCarthy is contested by the far right wing of the party, that of the Freedom caucus, which considers him too close to the establishment.

Five diehards “No Kevin” who accuse him of not being conservative enough. Enough to prevent the quorum of 218 votes, given that the 212 dems supported their flag candidate Hakim Jeffries, the first African American leader in the House. The five voted for Arizona’s ultra-conservative rival Andy Biggs, who was later supported by as many party colleagues, while 9 voted for other candidates: a package of 19 votes that also failed in the second ballot and which rose to 20 in the third. where the frond coalesced on Jim Jordan.