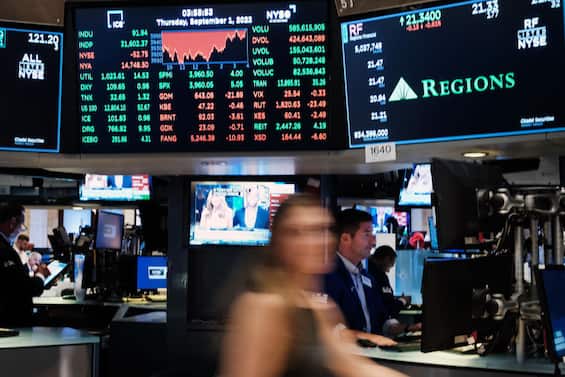 In the month of August, the high cost of life falls less than expected in the United States and causes all the main American markets to collapse by more than 2% in the wake of fears that the Fed may further raise interest rates in a week. European stock exchanges are also in red

New thud on Wall Street in the wake of fears about the rush of inflation. A little over three hours after the opening of trading, the Dow Jones index lost more than 2% while the Nasdaq and S&P 500 lost 4% and 3% respectively. Investors are worried about the report published by the Department of Labor: in August, consumer prices in the United States increased by 0.1% on a monthly basis and by 8.3% compared to the same month of the previous year. Two changes worse than those predicted by economists, who expected -0.1% in the first case and + 8.1% in the second. The European Stock Exchanges are also bad, with the Ftse Mib in Milan and the Cac40 in Pargi down by 1.4% and the Dax 30 in Frankfurt down by 1.6%.

The report also showed that core consumer prices, which exclude food and energy, rose 0.6% in August after rising 0.3% in the previous month. Even in this case, this is double the amount estimated by the experts. Not only. In the last month, energy prices have decreased by 5% but those of foodstuffs have increased by 0.8%, for an annual increase of 23.8% and 11.4% respectively, the latter given the highest since May 1979.

Fears for the Fed

A set of data that scares investors because it only underlines how the Federal Reserve, the American central bank, is still far from being able to mitigate the squeeze undertaken a few months ago. In a week, the Fed will most likely raise interest rates by 75 basis points for the third consecutive time. Indeed, futures on Fed Funds (which indicate the possibilities that the market attributes to a monetary policy move) now attribute a 20% chance to a 1% increase.