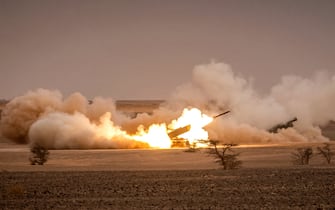 The United States is ready to change of pace in military support for Ukraine in the war against Russia: Washington is indeed in the process of send Himars missile systems to Kievequipped with ammunition with a range of 80 kilometers, double the Howitzers the US has provided so far

The Himarsacronym for High Mobility Artillery Rocket System, are gods trucks on which rocket launchers are installed. Each truck is capable of launching six rockets, capable of launching within seconds of each other. A small team is enough (trainable in a few days) and in a few minutes the Himars can be recharged, without the help of other vehicles

The system, developed at the end of the last century and already supplied to various European countries, can be equipped with GPS-guided rockets that increase accuracy shots. In the past they have been also used in Afghanistan and Syria against Isis. The advantage of these systems is that they will allow Ukrainians to hit over the Russian lines keeping a safe distance from enemy artillery

The announcement of the supply of more advanced missile systems was made directly from the president of the United StatesJoe Biden, in an article published in the New York Times

Zelensky: “We are not ready to cede any of our territories to Moscow”

“We want to see an independent, democratic and prosperous Ukraine,” Biden wrote. “We supply the weapons so that Kiev is in the strongest possible position at the negotiating table “

“For these reasons I decided to isend more advanced missile systems and ammunition to Ukraine”Wrote the president of the United States again. “These will allow them to more accurately hit strategic targets on the battlefield in Ukraine”

The specification of the “battlefield in Ukraine” is important, because NATO has said it since the beginning of the conflict opposed to sending weapons capable of hitting Russian soil directly: otherwise the risk of an open confrontation with Moscow would increase

For this reason it appears that the United States they will not supply Kiev with the most powerful rockets that the Himars system is able to launch: warheads capable of hit up to 300km of distance

“We we do not encourage or allow Ukraine to strike beyond its borders“, Specified Joe Biden. “We do not want to prolong the war to inflict more damage on Russia”

Reassurance in this sense they are arriving directly by Ukrainian President Volodymyr Zelensky: “I know people in the United States are saying, or someone in the White House is saying, that we could use them (the Himars, ed) to attack Russia. We have no intention of attacking Russia. We are not interested in the Russian Federation. We are not fighting on their territory ”

The decision anyway it does not appear to have been welcomed in Moscow. According to Russian Foreign Minister Serghei Lavrov, quoted by the Taxthe US supply of rocket launchers in Kiev would risk of provoke a widening of the conflict with the involvement of third countries. “Ukraine’s requests for foreign weapons are provocations aimed at involving the West in the conflict,” he added.