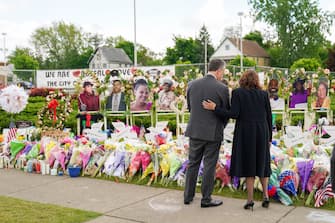 The courage to act – “When too much is too much, you have to have the courage to act”: Kamala Harris commenting on the shooting in a Texas school. “We pray for you, we are with you”, she said addressing the families of the victims and survivors, reiterating the need to take initiatives against gun violence. In the last 23 years alone, there have been 11 school shootings

“Positive impact” – “Common sense gun laws cannot prevent every tragedy, but they work and have a positive impact”. President Biden tweets it, recalling how when the ban on assault weapons was approved, mass shootings decreased. “When the law expired, the mass shootings tripled,” he added

Revision of the use of police force – Two years after the brutal killing of African American George Floyd, who was suffocated by an agent in Minneapolis, Joe Biden signed an executive order ordering federal agencies to review practices on the use of force, banning tactics like grabbing the neck ( chokehold) and restricts searches without warning. The measure also creates a national database to track police misconduct and further restricts the transfer of military equipment to police departments.

Not acting is inhuman – “You have to be a monster to kill children but do nothing after having repeatedly seen mass shootings like the one at Robb Elementary School it’s not just madness, it’s inhumanity”, said Amanda Gorman, the young poet who became famous after reading one of his works at the inauguration ceremony of Joe Biden. “The truth is that we are a nation under the threat of arms,” ​​he added

Put an end to all of this – “I am here on my knees to pray to you, please find a way together to put an end to this”. This is Democratic Senator Chris Murphy’s passionate appeal to fellow Republicans within hours of the Texas massacre. “Why did you get elected if your answer is to do nothing?” said the politician. Which he added: “Those children weren’t unlucky. It is not inevitable. What happened only happens in this country ”

Onestarfoundation.org – Republican Governor of Texas Greg Abbott announced the creation of a fund (Onestarfoundation.org) for the victims of the Uvalde Elementary School massacre and offered all members of the community free access to medical health services mental. Abbott also said that an anonymous donor offered $ 175,000 to cover the cost of the funeral

“Uvalde massacre is not the fault of the hooks” – “The political elites and large companies tell us that the fault of the evil that has manifested itself in Uvalde and elsewhere lies with weapons. But taking away weapons from responsible people will not make the United States safer. “Republican Senator Ted Cruz said at the NRA convention.” For some people, in some areas of the country, owning weapons is a matter of survival “, He attacked

“Nra backbone of US society” – “I am honored to be here with the great patriots of the NRA”. Donald Trump said this at the gun lobby convention. The former president was greeted with enthusiastic shouts and a long applause. “Unlike someone else I have not disappointed you and I am here,” he said referring to the governor of Texas, Greg Abbott who sent a video message. “You are the backbone of our society”, added Trump recalling “the horrible massacre of Uvalde”. The former president read all the names of the victims

“When will I be president …” – “When I am president for the second time, I will take care of eliminating evil”. Donald Trump said this, in fact announcing his candidacy in the 2024 elections even if he will still have to pass through the primary of the Republican party. The former president outlined his security agenda for almost an hour, emphasizing that there will never be a police definancing again.

“Billions in Ukraine but we don’t save schools” – Trump attacked Biden from the NRA convention stage in Houston. “If we can send billions to Ukraine we can also do whatever it takes to secure schools,” he attacked. “We want to save our children’s lives, schools shouldn’t be the easiest target to hit.” , the former president said by relaunching the proposal to arm teachers. “There is nothing more dangerous than a gun-free zone, urged Trump

Meghan in Texas – Surprisingly Meghan Markle, Duchess of Sussex who now lives in California, paid tribute to the little victims of the Texas school shooting: white t-shirt, tennis shoes, jeans and baseball cap, the wife of Prince Harry – il whose arrival had not been announced – visited the makeshift memorial set up near the site of the massacre, the Robb Elementary School, and placed a bouquet of white flowers

Kamala 2024? – Democrats are underestimating Kamala Harris’ chances for 2024. A Harvard CAPS-Harris Poll indicates that the US Vice President is widely favored over other potential liberal candidates for the White House should Joe Biden decide not to run. for a second term. According to the survey, Harris has in fact 19% of the preferences, almost double the 10% of Bernie Sanders and Hillary Clinton.

Transportation Secretary Pete Buttigieg has only 7%, while Minnesota Senator Amy Klobuchar has 3%. Democratic strategists and analysts have long believed Kamala Harris is a weak candidate, unable to compete in elections with rivals such as Donald Trump or Ron DeSantis

Gaffe Biden – In his speech for the graduation ceremony of the cadets of the Naval Academy of Annapolis Biden stressed how the response of the Western world, with the adherence to the sanctions for the Russian invasion, has been wider than expected. But in listing the countries in favor he made a gaffe, citing North Korea. Then Biden recalled the US leadership between allies and partners in the Indo-Pacific to contain the Chinese autocracy, guaranteeing stability in the region and freedom of navigation in the South China Sea.

Donald Trump and his sons Donald Jr and Ivanka must testify under oath in the ongoing civil investigation in New York for possible Trump Organization fraud and tax evasion offenses. A New York court decided it. “Our investigation will continue undaunted because ‘no one is above the law”, commented Attorney General Letizia James