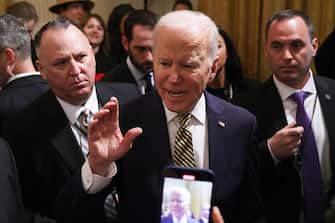 War criminal – Joe Biden called Vladimir Putin “a war criminal” for the invasion of Ukraine. As White House spokesman Jen Psaki pointed out, Biden was “speaking from his heart”, watching the “barbaric actions of a brutal dictator through his invasion of a foreign country.” The State Department, Psaki added, is conducting its formal investigation into war crimes

13.6 billion for Ukraine – “This war has turned three million Ukrainians into refugees. It is difficult to transport aid to Ukraine due to the Russian attacks but “we continue to do so thanks to the help of many brave people”. So Biden, on his social profiles, regarding the signing of the 1,500 billion dollar provision, which provides for 13.6 billion for Ukraine. “The Bipartisan Government Funding Bill provides historic funding for Ukraine for economic, humanitarian and defense support,” he added.

Help protect our skies – This is the appeal launched to the United States by the Ukrainian president, Volodymyr Zelensky, in his video address to Congress. “If it is too much to ask for a no fly zone, we offer an alternative”, continued Zelensky, “you know what we need, we need planes immediately, we need strong aviation to protect our people, our freedom and our land. , to protect Europe. “” You know that these planes are there but they are on the ground and not in the Ukrainian skies “, added Zelensky

Respect between powers, no to the Cold War – The US is ready to continue the dialogue with China to prevent further escalation in Ukraine. President Joe Biden said this in a phone call with Xi Jinping. China, on the other hand, believes that the long-term solution to the crisis in Ukraine lies “in mutual respect between the major powers” and “abandoning the Cold War mentality”. This was stated by the Chinese president during his video-conference interview with President Joe Biden, which lasted one hour and 50 minutes.

But…The phone call between Biden and Xi Jinping did not dissolve Washington’s concerns about Beijing’s possible material support for the Russian offensive in Ukraine. This was stated by the spokesman of the White House, Jen Psaki. “We have this concern,” Psaki said, “Biden detailed the implications and consequences of China providing material support to Russia while attacking Ukrainian cities and civilians. And it is something we are paying attention to and to which the world will pay attention ”

Ukraine-China-USA – Ukraine called on China to join the West in condemning “Russian barbarism” the day after the conversation between Xi Jinping and Biden. “China can be the important element of the global security system if it makes the right decision to support the coalition of civilized countries and condemn Russian barbarism,” Ukrainian presidential adviser Mikhailo Podolyak wrote on Twitter. China did not condemn the invasion of Ukraine decided by Moscow

Forbidden – Moscow bans President Joe Biden and Secretary of State Antony Blinken from entering Russia. This was reported by the Russian Foreign Ministry. The sanctions include blocking entry into Russia and freezing assets, but do not prevent high-level contacts if necessary. After the sanctions on Joe Biden, however, the Russian government has also taken measures against the Canadian premier, Justin Trudeau, and his foreign and defense ministers. Numerous members of the House of Commons in Ottawa have also ended up on the ‘black list’

The US response – According to the US Treasury, the United States has imposed new sanctions on Russia for Ukraine, also affecting the president of Belarus, Alexanderf Lukashenko, and his family

Security of NATO allies – The United States is committed to the security of NATO allies. This is the message sent by the American vice president Kamala Harris to the premieres of Bulgaria and the Czech Republic, Kiril Petkov and Petr Fiala, during a telephone conversation. “Leaders discussed US and EU efforts to assist Ukraine and the region, including humanitarian efforts to flee violence,” wrote the White House.

Trump & Putin – Donald Trump backs off on Vladimir Putin. The former US president withdrew his previous support for the Russian president, saying he was “surprised” that he invaded Ukraine. “I thought he was negotiating when he sent his troops to the border,” Trump told the Washington Examiner, noting, “I thought it was a difficult, but smart way to negotiate.”

The tycoon had called the Kremlin leader “brilliant”, attracting an avalanche of criticism. Now, however, in light of the developments, he has changed his mind: “I think it has changed – Trump said of Putin – It is a very sad thing for the world. It has changed a lot ”

Why so slow? – The slow pace of President Joe Biden’s action in the Ukrainian crisis depends, according to his predecessor Donald Trump, on a conflict of interest involving his son Hunter. The former president himself said so on the day Moscow announced sanctions against the head of the White House and other North American authorities. According to Trump and the indictment of a report by Republican senators, Hunter Biden received a payment of $ 3.5 million from the wife of the mayor of Moscow in 2014.

Sanctions to the oligarchs – Nearly 100 Russian or Russian-related aircraft have been sanctioned by the United States in response to the invasion of Ukraine. Among these is also one of the private jets of billionaire Roman Abramovich. The BBC reports it. The US Department of Commerce has warned that providing services to these aircraft anywhere in the world, including Russia, could carry the risk of heavy fines up to detention.

The blacklisted aircraft are almost all Boeing of Russian companies and the national airline Aeroflot. There are also aircraft of Belarusian carriers. The only exception is the Gulfstream jet owned by Abramovich. The oligarch, owner of the Chelsea football club, has already been hit by heavy sanctions from Great Britain for his close ties to Vladimir Putin

Tps for Afghans in the Us – The Biden administration has announced that it will grant Afghans living on American soil “temporary protection”, a status that prevents deportation and grants the right to work in the US for the next 18 months. “The Tps (Temporary protected status) will protect Afghans living in the United States from the risk of returning to an unsafe situation, “Internal Security Minister Alejandro Mayorkas said in a statement.

2024 – Far from the spotlight of the war in Ukraine, the great maneuvers in view of the presidential elections of 2024 also continue in the field, in case Joe Biden does not reapply. Former Bernie Sanders advisors are privately courting Indian-born Californian Congressman Ro Khanna, 45, a lawyer and former deputy assistant to the secretary of commerce in the first Obama administration. This is what Politico writes

Khanna, considered a close ally of Senator Sanders and one of his possible political heirs, sees himself as a progressive capitalist, has excellent ties to Silicon Valley and is one of the very few MPs who has pledged not to accept contributions from large corporations and the Pac , the opaque electoral committees that finance candidates. He could therefore become a candidate of the liberal wing, even if the person concerned, for now, denies he wants to race

But behind the scenes the list of governors, senators and dem deputies is growing who are considering the possibility of participating in a possible primary without Biden in two years, due to his advanced age and the current polls certainly not flattering. Everyone is reluctant to speak out publicly for fear of undermining the president, who has said he wants to run again – if he’s healthy – always in ticket with Kamala Harris.

Daylight savings time – The US Senate unanimously voted in favor of a law to make DST permanent, which in the United States started last Sunday and usually remains in effect until November 6. CNN reports it. The measure, called the ‘Sunshine protection act’, will come to Congress for approval before ending up on President Joe Biden’s desk for the final go-ahead. Daylight saving time has been in effect in the US since 1918 but not all states apply it, for example, Hawaai and Arizona are not valid