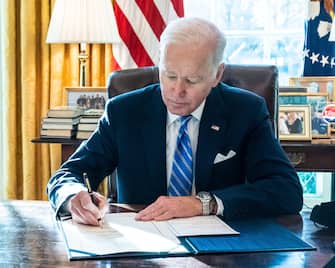 Omicron fight – Faced with the advance of the Omicron variant of Covid-19, President Joe Biden will speak to the nation again on Tuesday to announce new anti-Covid measures, invite vaccinations, take the third dose, use masks. A White House official told NBC News that the president will tell Americans how the administration will “respond to the challenge” of growing cases and “also issue a stark warning about what winter will be like for Americans who choose to remain unvaccinated. ”

Unexpected Kamala Harris admits: The Biden administration did not expect and did not see the Delta and Omicron variants emerge. In an interview with the Los Angeles Times, the vice president also said she was concerned about the possibility that vaccine misinformation could prolong the pandemic for a third year. “We didn’t see Delta coming. We didn’t see Omicron coming. And this is the nature of this virus with its mutations and variants “, says Harris, highlighting that” the greatest threat to Americans is not being vaccinated ”

An Ohio Court of Appeals has found American President Joe Biden right: companies with more than 100 employees must ask their staff to get vaccinated against Covid-19, submit a weekly negative test and wear a mask to go there of work. The Washington Department of Labor plan is expected to go into effect on January 4th, but could be challenged in the United States Supreme Court

Marine Corps – The Marine Corps has discharged 103 military personnel who refused to be vaccinated against Covid-19. 95% of the marines on duty are immunized, and the requests for exemptions are being evaluated. More than 97% of the American military forces are partially or fully vaccinated, and the Air Force reaches 97.5%, while the Navy 98%.

Kids 2-5 – Pfizer is postponing its plans to apply for Covid vaccine authorization for children between 2 and 5 years old after tests have shown a weaker-than-expected immune response. Pfizer and BioNTech, the American media report, intend to conduct other tests and, if successful, will ask the American authorities for authorization in the first half of 2022

Getting a booster is love – The White House continues to ask Americans to undergo the third dose of the vaccine, advertising the booster through social channels. One of the latest posts points to a proper to-do list, including delivering cookies to loved ones and making decorations. The most important, however, which is indicated and underlined, is “get booster shot”, or the third dose

Pentatonix – And Pentatonix, artists with three Grammys and tons of other certifications, visited Joe and Jill Biden to invite US citizens to book the booster shot. As? Through a song, a cappella, published on the White House social media. To listen to!

Rockettes done for the season – One of the most spectacular shows on Broadway, “The Christmas Spectacular Starring the Radio City Rockettes”, stops due to the increase in infections from Omicron. In a press release, the company undertakes to return the cost of the ticket to those who had already bought it and looks confidently to 2022, writing: “we look forward to welcoming fans back to Radio City Music Hall in 2022”

Kentucky help – “Tornadoes have devastated everything they found in their way, it’s something incredible.” This is what Joe Biden, on a visit to Kentucky, said to take a closer look at the damage caused by the tornadoes that hit the state last week. “We will not leave you alone. I intend to do everything I can, for as long as it takes to support the tornado-ravaged state, “added Biden, who assured that the federal government will help rebuild.

Voting rights – The restriction on voting rights “is not American”. President Joe Biden said this, speaking to students from South Carolina State University, attending the semester closing ceremony. “We must pass the Joe Lewis Voting Rights Act,” he added. The reference is to the bill that binds each state to receive the green light from the Justice Department for any change to the electoral law. Biden also denounced the “incessant attacks” of the Republicans against the access of minorities to the vote

Never give up – “My mother always told me, never give up, always get up”. Joe Biden said it referring to when, as a student, he had problems with stuttering, but the message was ideally addressed to the country, devastated by tornadoes and the pandemic that is returning to hit more aggressively. Biden recalled the importance of the school in modernizing society: “The school has produced 40 percent of engineers who are African American, 50 percent are African American lawyers, 70 percent are doctors, 80 percent are judges. ”

Jan 6 – Five years in prison for Robert Scott Palmer, one of the rioters who attacked the US Congress on January 6. This is the heaviest sentence so far inflicted among those who stormed Capitol Hill. Palmer, a resident of Florida, had attacked police overseeing Congress with a fire extinguisher and a wooden club. “It must be clear that trying to stop the peaceful transition of power by assaulting law enforcement agencies involves certain punishment,” said Judge Tanya Chutkan announcing her decision.

Abbott in recent months had assured that he would continue the work begun by Donald Trump. “Three billion dollars of Texan taxpayers will go to the cause. This is less expensive for Texas than it was for the Trump administration as we don’t have to buy land – it’s already in our possession, “Governor Abbott noted.

Bell Hooks – African American feminist writer Bell Hooks has died aged 69. The announcement was made by the family. Born Gloria Jean Watkins in 1952, Hooks died of what Berea College in Kentuky, where she had been teaching since 2004, called “a long illness”. His first collection of poems, “And there Wept”, was published in 1978, three years later it was the turn of his smash hit “Ain’t I a Woman? Black Women and Feminism ”focused on discrimination against African American women

49 – Joe Biden commemorated the 49th anniversary of the car accident in which his first wife Neilla and 13-month-old daughter Naomi Christina died, visiting their graves in the cemetery behind the church of Saint Joseph on the Brandywine, Delaware. Neilla had gone out in the car with the little girl and her older children, Beau and Hunter, aged four and three, who were seriously injured, to go and buy a Christmas tree. The President went to the cemetery with his second wife Jill

Proposal – In the White House there are – also – marriage proposals. Well yes! In the State Dining Room, the room that celebrates the family, Jennifer was asked the important question, to which she replied “Yes”, between happiness and emotion. All, of course !, documented on the social networks of the Office of Presidential Correspondence