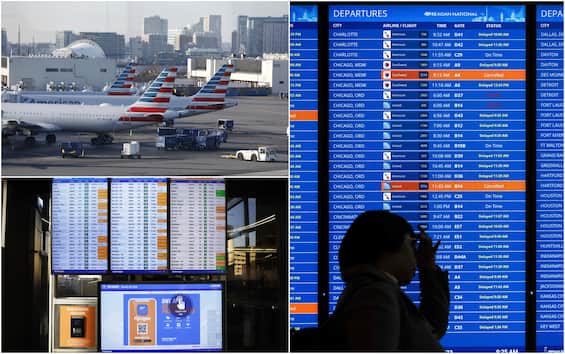 The cause of the failure that sent US air traffic into a tailspin would be a damaged file in the Notam system, which is used to send safety alerts to pilots, and in its backup. CNN reported it, citing its own sources. Federal Aviation Administration (FAA) executives had therefore decided to restart the system at dawn on Wednesday, before the air traffic becomes heavy, since the operation typically takes 90 minutes. The system recovered but was incomplete and took longer than expected, forcing the FAA to suspend all flights for a few hours. Even the White House spokeswoman, Karine Jean-Pierre, said that “the stop of flights decided by the FAA was caused by a failure in the Notam system. Traffic was restored after 90 minutes. At the moment there is no evidence that the problem was caused by a cyberattack”.

Yesterday the world’s largest aircraft fleet was paralyzed for a few hours due to a technical failure that caused delays for nearly eight thousand aircraft and the cancellation of more than 1,000 flights across the United States. An extraordinary event that some have compared to the blockade following the September 11 attacks. President Joe Biden has asked the Transportation Ministry to open an investigation. According to what has emerged, the problem with the system would have already occurred on Tuesday evening, but thanks to an emergency telephone line, the FAA managed to limit the damage and guarantee traffic during the night between Tuesday and Wednesday. Yesterday morning, however, with the increase in flights, the emergency line was overloaded and the institution was forced to impose a stop on flights. About 21,000 were scheduled to take off from the United States all day Wednesday and about 1,840 were arriving. Ultimately the toll was over 7,400 aircraft delayed and 1,109 written off.

The halt imposed by the Federal Aviation Authority on all American flights has shown how much air transport in the world’s largest economy depends on an outdated computer system. Created in 1947, once an acronym for ‘Notice to airmen’ (notifications to male pilots), anachronistic and sexist term then changed to ‘Notice to Air Missions System’, the Notam system is used to send safety alerts to pilots. Alerts are central to flight planning and are used to provide real-time information about any in-flight or ground-based hazards, such as runway closures, airspace restrictions and navigation signal disruptions. Insiders argue that Notam failures are rare, but just one of these sent all US air traffic into a tailspin for several hours.

For security experts it is likely that it was just a computer failure because, they argue, when there is the hand of hackers it is discovered “in a few minutes”. However, they report, cybersecurity agencies are monitoring closely especially to check for possible attacks from Russia, Iran and North Korea and after, last October, some of the major US airports – including La Guardia in New York, Los Angeles and Chicago – had been hit by hackers from Moscow.