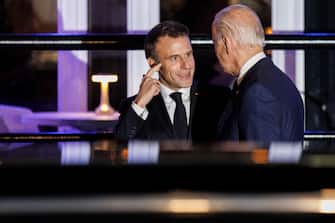 France and the USA “fight together for freedom and justice” and their alliance is “essential for the defense of democracy”. This was stated by the US president, Joe Biden, speaking at the White House together with his French colleague, Emmanuel Macron, on a state visit to Washington.

“For centuries we have come together, we have charted a course to a world of greater freedom, greater opportunity, greater dignity and greater peace,” Biden said. The US president underlined, in French, the values ​​of “liberty, equality and fraternity”.

“The United States could not ask for a better partner than France to work with,” assured the American president.

On the sidelines of the visit, Emmanuel Macron confirmed his intention to speak with Vladimir Putin, anticipated in recent days by sources from the Elysée Palace, in an interview with American TV ABC. The French president said that in the next few days he will have a telephone conversation with the Russian president, with whom the last contact dates back to 11 September.

Putin “made a mistake – said Macron – Is it impossible to go back to the table and negotiate something? I think it is always possible”. Then the president explained that for the interview with the Russian president he wanted to wait for the visit to Washington and “have an in-depth discussion with President Biden and our teams”.

Previously Biden, from the @Potus Twitter account, had relaunched a photo. “We welcome friends to town,” showing the dinner he and Jill Biden had with Emmanuel and Brigitte Macron at Georgetown’s renowned Italian restaurant “Fiola Mare.” The photo shows the two smiling couples around the table of the restaurant famous for its refined fish dishes and its view of the river.

When dinner was over, the first ladies to leave were the first. Then the presidents, with Macron appearing to speak animatedly. The two did not answer questions from journalists waiting for them at the exit and asked if they had “resolved the differences on subsidies”. Shortly before meeting Biden and his wife for dinner, the French president, speaking during a breakfast in Capitol Hill, contested the subsidies to American companies provided for by the anti-inflation law wanted by Joe Biden.

The Russian war in Ukraine “will be the first topic of our discussion”, we want to build “a sustainable peace”, explains French President Emmanuel Macron in his meeting with Joe Biden at the White House, saying he is “happy and honored to be here for the first US administration’s state visit.

Biden’s endorsement of Macron’s European leadership comes with clear words. Emmanuel Macron is “not only the leader of France, but also of Europe”, says US President Joe Biden, in the initial statements of his meeting with the head of the Elysée in the Oval office. To journalists who asked him why he had chosen the French president as a guest on his first state visit, Biden replied “because he is my friend”.

In the traditional exchange of gifts at the White House, Joe Biden offered French President Emmanuel Macron a collection of vinyls of the greatest American musicians, the reproduction of a mirror hanging in the West Wing of the White House made with the wood of a tree fallen in the presidential residence and a copy of Thomas Edison’s 1877 phonograph patent. First lady Brigitte, First Lady Jill Biden donated a gold and emerald pendant crafted by a French-American artist.