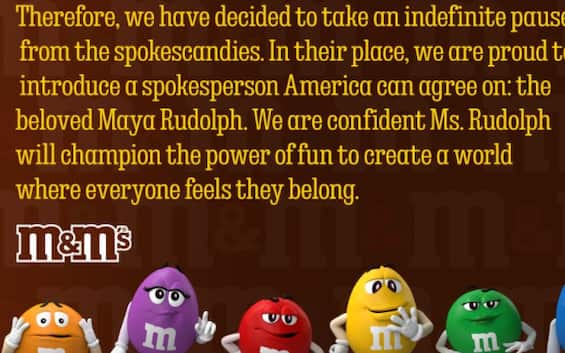 M&M’s, the historic company of Mars, born in New Jersey in 1941, announced today on Twitter that it will “pause” the famous colorful mascots, from the sarcastic Red to the naive Yellow, and Green, Blue, Orange and Miss Brown, for “avoid further polarisation” in the country. The decision was made after it had been decided in recent months to change some details of some “characters” to make them more inclusive. Ms Brown swapped her stylish stilettos for a low-heeled pair while Green switched from 60s ankle boots to sneakers.

The decision sparked a reaction from some conservatives, including the main Fox News host, Trumpian Tucker Carlson, who accused Mars of having made “her characters less sexy, deeply uninviting and too inclusive”. indirectly invited to boycott the product, as a symbol of “woke culture”, i.e. inclusiveness and the right to sexual identity.

The company fears a slump in sales

The Fox News audience, according to the American media, faithfully follows the messages of its favorite TV, probably the American company feared a collapse in sales, and the risk of seeing the ‘mascots’ linked to only one part of the country. Thus came the announcement: “We weren’t sure that anyone would have noticed it – they wrote in the press release – and we certainly didn’t think it would have made inroads into the net. But now we have understood that even the shoes of a dessert can be polarizing, that is, the It’s the last thing M&M’s would want since we want to bring people together.”

The company will then put the mascots on hold “indefinitely”, to replace them with comedian and voice actress Maya Rudolph, who became famous for her impersonations of Beyoncé, Oprah Winfrey and Donatella Versace.