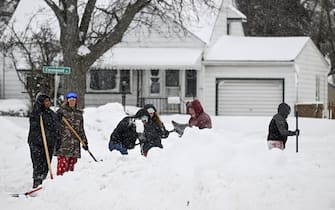 The death toll in the United States from the Arctic storm rises to 64 which has been flagellating the country for days. Among the hardest hit areas is the Buffalo areathe city in New York State: the victims here are at least 28

The people who lost their lives in Erie County, where Buffalo is located, have been found trapped in their cars or homes or under drifts of snow. Some died due to delays in relief efforts, hampered by the storm

Joe Biden called New York Gov. Kathy Hochul. “We are ready to provide all the necessary resources to overcome this,” wrote the American president on Twitter, stressing that he and First Lady Jill are praying for the victims and their families. A state of emergency has been declared in the area

Nor does the transport situation improve, with over 3,400 flights – domestic and international – cancelled until 3pm on Monday, according to the FlightAware website. The company most affected is Southwest Airlines, which has had to cancel 60% of its flights, 10 times those of the other major US companies. Thousands of delayed flights too

States where there are victims they are Colorado, Illinois, Kansas, Kentucky, Michigan, Missouri, Nebraska, New York, Ohio, Oklahoma, Tennessee and Wisconsin. In recent days hundreds of thousands of people were left without electricity

All the news from the USA

The toll of the storm is very heavy: in addition to the victims, there are more than 200,000 people without electricity or heating and cities devastated as “war zones”. The storm of the century is hitting the whole United States these days: from the Great Lakes on the border with Canada to the southern end of the Rio Grande, on the border between Texas and Mexico, where bad weather is making the situation even more dramatic of thousands of migrants seeking refuge

Buffalo and upstate New York are the hardest hit areas: in the city there are still 4 thousand houses without electricity and heating and the weather service warns that up to 20 cm of snow will fall in the next few hours. Governor Kathy Hochul spoke of a “war against mother nature that is hitting us with everything she has”. Hundreds of National Guardsmen were deployed to help rescuers and over 500 rescues were carried out over the weekend alone, including one of a woman who was helped to give birth

The exceptional winter storm resulted casualties and damages also in Vermont, Ohio, Missouri, Wisconsin, Kansas and Colorado. In Florida the thermometer dipped so low that the iguanas froze and fell out of the trees. But the state with the lowest temperature these days was Montanawith -45 degrees

Bad weather is also affecting Canada. So far there have been 4 deaths in the country and the provinces that are feeling the brunt of the storm are Ontario and Quebec

The situation in Buffalo

The situation in Buffalo

In the US the coldest Christmas of the last 40 years. PHOTO