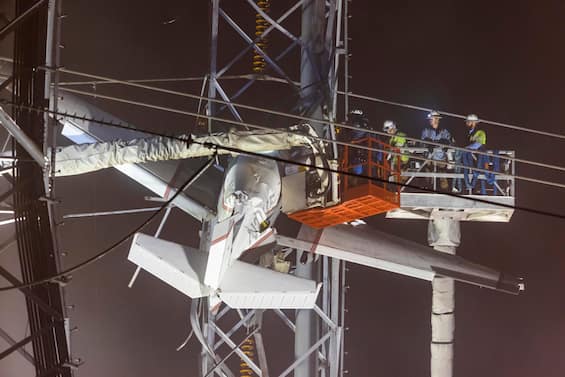 A small plane carrying two people crashed into a power line tower near Montgomery County Airpark in Gaithersburg, Maryland, causing widespread power outages across the county. Luckily both pilot Patrick Merkle, 65, of Washington, DC and passenger Jan Williams, 66, were unharmed in the aircraft, a Mooney M20J, stuck 30 meters above the ground.

Montgomery County Fire Chief Scott Goldstein described the complexity of the rescue to reporters, explaining that utility contractors will first need to ground high-voltage lines to make it safe for rescuers to work. Firefighters will then use a truck or crane to stabilize the plane by tying it to the tower.

The power company said about 120,000 customers are without power in Montgomery County. The crash occurred in Gaithersburg, a city of 69,000 people about 24 miles (39 kilometers) northwest of Washington, DC The cause of the crash is still unclear, the FAA and the National Transportation Safety Board have opened a investigation into the incident.