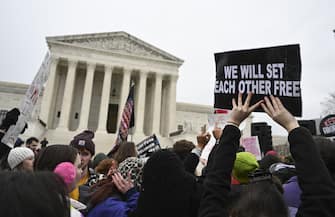 On the occasion of the 50th anniversary of the sentence “Roe w Wade”, which sanctioned the right to abortion in the United States, a few have been held in major American cities demonstrations against the decision of the US Supreme Court last year June which, overturning the historical sentence of the 1973has effectively granted each state the possibility of prohibiting abortions

READ ALSO – Right to abortion in the USA, from the Roe vs. Wade to abolition: the stages

One of the most awaited events was the one that took place at Madisonin Wisconsin (photo), which abolished the right to abortion immediately after the judgment of the nine essays last June unless the woman is not life threatening

READ ALSO – Usa, the Supreme Court cancels the right to abortion: what changes

To the cry of several sloganincluding “Bigger than Roe”, activists and activists also marched to HoustonTexas, another state that has banned abortion, ea TampaFlorida, where the Republican governor Ron DeSantis imposed the ban starting from the 15th week

Demonstrations were also held in other American cities, from Washingtonto New Yorkfrom Chicago, a Los Angeles (photo), then passing through San Francisco and Seattle

Among the marches organized by pro-abortion protesters, the one that took place in New York. Here is a passage of the procession in front of the Cathedral of St. Patrick

The streets of Big Appleduring the event, populated by billboards and the presence of men and women who wanted to celebrate the 50th anniversary of the “Roe w Wade” sentence

The president also intervened on the subject, precisely on the day of the demonstrations in the main American cities Joe Bidenposting a tweet in which he stated that the fight for the right to abortion it’s not over

“It should have been the 50th anniversary of Roe v. Wade,” recalled the american presidentreferring to the original sentence. “Instead, Republican Maga officials” – supporters of former President Trump – “are waging a war on women’s right to make their own decisions.” Biden added, “I haven’t stopped fighting for to protect women’s rights and I never will”