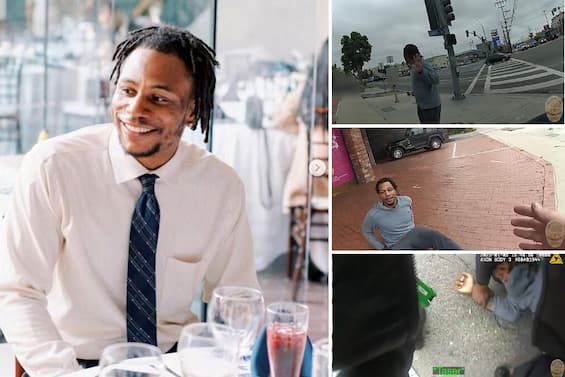 Keenan Anderson, a 31-year-old teacher and cousin of Black Lives Matter founder Patrisse Cullors, died after police officers repeatedly hit him with a taser gun and kept him pinned to the ground with a police officer pressing his elbow on his neck following a car accident (THE VIDEO). “They are trying to kill me like George Floyd,” the young man shouted at one point, according to body-cam video released yesterday by the LAPD.

Cullors: “He asked for help and he didn’t get it, they killed him”

In the video, which dates back to January 3, several officers are seen holding Anderson on the ground: one putting his elbow on his neck, while another hit him with a taser for about 30 seconds and then again for another 5 seconds. “My cousin asked for help and didn’t receive it, they killed him – he told the Guardian Cullors – no one deserves to die in panic and fear: my cousin feared for his life, he has spent the last 10 years watching him grow a movement that challenges the killings of African Americans.”

Stopped after an automobile accident

According to the reconstruction, Anderson had been involved in a car accident and when the police arrived they found him in the middle of the road asking for help. At this point the officer ordered him to go to the sidewalk and stand against the wall. The 31-year-old initially complied, but then became concerned by the policeman’s aggressive attitude and tried to flee. Once stopped, the agent ordered him to lie on his stomach, other agents arrived with the young man saying “help me, they are trying to kill me”. After being pinned down and tasered, Anderson went into cardiac arrest and died following hospitalization.

“He was a traffic accident, instead of treating him as a potential criminal they should have called an ambulance – Cullors denounces – this type of killing and use of force will not cease unless we have courageous elected officials who challenge not only the police but policies as well.” Statistics show that around 10% of police killings occur during traffic accident interventions.

For agents Anderson had “erratic” behavior

Los Angeles Police Chief Michel Moore said Anderson had “erratic” behavior with officers and that, according to initial tests, he had traces of cannabis and cocaine in his blood. “Keenan’s murder is absolutely horrific, the police are not talking about killing but ‘death in custody’, but Keenan was tasered, we know the police caused his death, a minor car accident shouldn’t lead to the death of an African American, unarmed and who had done nothing wrong,” was the reply of Melina Abdullah, another co-founder of Black Lives Matter Los Angeles.