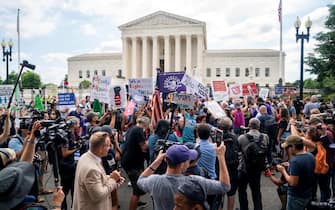 There Supreme Court of the United States has abolished the historic ruling “Roe v. Wade ”with which in 1973 he legalized abortion in the US. What does it mean? That individual states are now free to apply their laws on the matter and some have already moved

WATCH THE VIDEO: Right to abortion in Italy, law 194 after 44 years

With this decision the United States becomes one of the 4 nations in the world to cancel the right to abortion since 1994. The other countries are Poland, Salvador and Nicaragua. “The Constitution does not confer the right to abortion”, reads the decision of the Supreme Court, passed with 6 votes in favor and 3 against. They gathered in front of the headquarters several protesters, both those in favor and those against the decision. If historically the Court has almost always overturned the sentences to broaden the rights, this time it has reduced them

US, Supreme Court abolishes sentence that for about 50 years guaranteed the right to abortion

With the annulment of the sentence which almost fifty years ago established the right to abortion, more than half of the fifty American states can immediately ban the use of abortion, impacting the lives of tens of millions of people. Many conservative states, in fact, are ready to act after today’s decision and some have already moved. Twenty-six states were waiting for the green light from the Court: of these, thirteen are able to immediately declare abortion illegal. Most are Southern and Midwestern states

Right to abortion in the US, from the Roe vs. Wade to abolition: the stages

After the decision of the Supreme Court, Missouri was the first US state to ban abortion, except for health emergencies. Republican governor Mike Parson, in fact, has already signed the law that triggers the ban on elective abortion in the state. “Nothing in the text, history or tradition of the United States Constitution has given unelected federal judges the authority to regulate abortion,” he said.

The reactions after the sentence

“This is a monumental day for the sanctity of life,” Missouri State Justice Minister Eric Schmitt tweeted. He stressed that “following the Supreme Court decision to cancel ‘Roe vs Wade’, Missouri is the first to end abortion.” “Today is a historic daybut we remember the 60 million innocent lives lost, there was a lot of work behind the scenes to achieve this incredible victory, “added Schmitt posting the photo while signing the measure.

Usa, the Supreme Court establishes the right to carry arms

The attorney general of the Texas, Ken Paxton, said abortion is illegal in the state with immediate effect. He then he added that the structures that offer abortions can be considered by “criminally responsible starting from today”

But other states are ready to move. Louisiana, for example, also has a law that can go into effect immediately. Idaho in thirty days. Michigan has one that is currently in court. Another group of states want to ban abortion in the very early stages, when women still don’t even know they are pregnant

In states where abortion will be banned, to terminate a pregnancy, millions of people will have to travel thousands of kilometers or go home secretly, like in the 1950s. According to the Center for Reproductive Rights, more than 58% of women of childbearing age – a percentage equivalent to forty million people – live in US states that are opposed to abortion.

The Court’s decision, however, it does not mean that there is automatically a national law prohibiting abortion. That will eventually be up to Congress, with the possibility that, if the predictions for the Midterm elections in November are confirmed, both in the House and in the Senate, anti-abortion republicans will be in the majority. But we have to see with which numbers

To be approved, in fact, a law requires a majority of the House representatives and at least 60 votes in the Senate and then the signature of the US president, in this case Joe Biden (a Catholic, but opposed to restricting women’s rights). At the moment, the situation in the Senate sees 50 Democrats and 50 Republicans. Conservatives should try to win at least a majority of 8 senators and then rely on the support of those uncertain moderates, including Joe Manchin, who has often crossed the border to vote alongside the Republicans.

In any case, in some states the right to abortion will remain, such as in California and New York. “Access to abortion is a fundamental human right and remains safe, accessible and legal a New York“State Governor Kathy Hochul said.” Those who want an abortion in the country know that you are welcome here. We will make every effort to ensure that reproductive services remain available and accessible to you, “assured Big Apple Mayor Eric Adams.

Other states have also lined up in defense of abortion. In particular, three liberal states on the Pacific coast have announced a joint commitment to defend abortion rights. “The governors of California, Oregon and Washington have issued a multi-state pledge to advocate access to reproductive health, including abortion and contraceptive systems, and pledged to protect patients and doctors against efforts by other states to export their abortion bans in our States “, reads a statement

The only chance progressive America has to save “Roe v Wade” is to do so through a law, clearly winning the November elections. Almost impossible mission, but from today abortion will certainly be the central theme on which the Democrats will aim to revive a less motivated electorate than two years ago