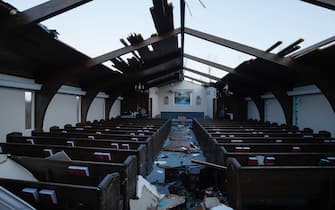 A powerful disturbance generated at least 30 tornadoes in the Midwest of the United States that caused damage and deaths in Arkansas, Illinois, Kentucky, Missouri, Mississippi and Tennessee

The heaviest toll at the moment appears to be in Kentucky, where state governor Andy Beshear said there could be up to 100 casualties.

Tornadoes devastate the United States, dozens of deaths are feared in Kentucky

The official confirmations concern five victims at the moment: three in Tennessee, one in Arkansas and one in Missouri

In Arkansas, one of the tornadoes also hit a retirement home in Monette

In neighboring Mississippi, just eight miles away, in Leachville, a woman lost her life after the storm blocked some people at a convenience store

In Tennessee, too, the damage was counted and several people were trapped for hours

In Illinois, one of the tornadoes engulfed an Amazon warehouse in Edwardsville, where about 100 employees were trapped in the facility

The rescue operation lasted all night in an attempt to free as many people as possible from the rubble. Inside the warehouse, in fact, there were numerous employees present for the evening shift due to the extra work due to Christmas orders

Overall, the disturbance affected over 55 million people across the United States and approximately 157,000 residents remained in the dark due to problems with the electricity grid.

US President Joe Biden spoke of “an unimaginable tragedy”