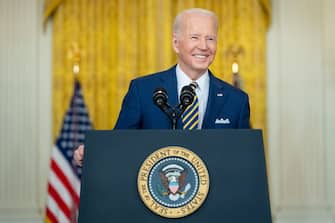 A year of challenges – The past year was “a year of challenges and enormous progress”. Thus US President Joe Biden, in the speech that marked one year after his entry into the White House. The president listed the successes of his presidency: from the two million Americans vaccinated at the beginning of his term, Biden pointed out, it has gone to “210 million fully vaccinated Americans.” “We have created 6 million new jobs . More than ever before. ”The unemployment rate, Biden recalled, fell to 3.9%

Home test – Biden also talked about the new tests available at home. “We are delivering a billion – he continued – there are 20,000 places where you can be tested for free, we have more treatments for those in the hospital, we have purchased more than twenty million pills for Covid, more than any other country, Work does not it is still over, it will improve, we will face a period in which Covid will no longer upset our lives ”

“I didn’t make exaggerated promises” – Biden, answering a reporter’s question in the White House press conference, complained about the parliamentary obstruction of the Republicans, which aims not to make him accomplish anything. He defended the work of his vice president, Kamala Harris, assuring that he will be part of his ticket also in 2024. “I think she is doing a good job”, said the president and “She will be my deputy” also in the next elections, he assured Biden

Disappointed – “I am deeply disappointed that the Senate has failed to stand up in defense of our democracy. I am disappointed, but I am not discouraged. We will continue to promote the necessary legislation and push for Senate procedural changes that protect the right to vote, “Biden wrote on Twitter, commenting on the vote in which the Washington Senate rejected the Democratic party’s attempt to change the filing rules. in order to ensure the approval of a bill to protect the right to vote

Huge challenges – Barack Obama wanted to pay homage to Joe Biden, his VP for two terms and current US president, with a post on his social networks: “In his speech, a year ago, POTUS pledged to work hard, with many things to do in a winter of danger and urgency. After a year, he and Madam VP have made significant progress given the enormous challenges “. To these words of esteem, Obama added a photo of him together with Biden

Roe VS Wade – Joe Biden and Kamala Harris pledge to defend the right to terminate pregnancy, with a statement released on the occasion of the 49th anniversary of the historic Supreme Court ruling “Roe versus Wade” which established it. A constitutional right, Biden and Harris said, “is under attack as never before. It is a right that we believe should be codified by law and we promise to defend with every tool in our possession ”

“Access under attack” – “In recent years we have seen efforts to restrict access to reproductive health to an alarming level,” access that is “under attack” in Texas, Mississippi and other states, “Biden and Harris said in a statement. restrictions undermine the freedom of all women and are particularly devastating for those with fewer opportunities and resources “, reads the statement in which it promises to ensure” the same fundamental rights for daughters and granddaughters for which their mothers and grandmothers have fought and won ”

Joe Biden recalled in a tweet the 22-year-old police officer killed Friday night in New York. “The agents wear badges every day and face danger. We are grateful to them for their extraordinary sacrifice,” says Biden.

Harris in California – “As a Californian, I know well the devastation that fires bring”: this is the beginning of the tweet of Kamala Harris who, in recent days, together with Sec. Tom Vilsack, has searched from above the consequences of the fires in the San Bernardino National Forest , in California. For years, the state has been facing the fire emergency in several periods of the year, with heavy losses

Jill Biden – Interviewed by the Associated Press the day after visiting Louisville, Colorado, where a massive fire ravaged the area late last month, Lady Biden said she “didn’t expect to have to offer so much comfort because the country has gone meeting so much “. In Colorado, he embraced people who could not help but witness the destruction of their homes. After the fires, Jill Biden flew to Wisconsin and Kentucky, to visit areas devastated by a tornado

Good chances – In 2024 there are “good chances” of a rematch between Hillary Clinton and Donald Trump. This was stated by Dick Morris, former advisor to President Bill Clinton, to “The Cats Roundtable”, confirming the rumors that speak of a possible descent into the field of the former first lady defeated by Trump in 2016

“If the Democrats lose control of Congress in next November’s midterm election,” says Morris, “Biden and Harris will almost certainly be out of business, on a dead end,” paving the way for the former secretary of state. . The architect of Hillary’s strategy would be her husband Bill: “Only he in Hillary’s inner circle is able to develop a winning strategy, pragmatic and not ideological”, explains Morris

Latest in – On the Republican front, the latest polls give Trump a clear advantage over the other possible presidential candidates, detaching the second, the governor of Florida Ron DeSantis, by 11 points according to Reuters-Ipsos

Blinken – Ukraine – Any crossing of the Ukrainian border by Russian troops is an “aggression” and would involve a “rapid and serious joint response” by the Western allies. This is what US Secretary of State Antony Blinken said during the press conference in Berlin together with German Foreign Minister Annalena Baerbock

Responding to a question about Joe Biden’s words on the nature and extent of a possible Russian attack, Blinken explained that “every possible scenario” is being considered to assess what “coordinated reactions” can be implemented. This also concerns the possibility, explained Blinken, of issuing new sanctions

Jan 6 – Grisham – In the days immediately preceding the assault on Congress on January 6, 2021, Donald Trump held secret meetings at the White House with a very small circle of allies and advisers to discuss what to do to prevent Joe Biden’s victory from being certified in the Senate. This was revealed by former presidential spokesman Stephanie Grisham speaking to the commission of inquiry investigating the attack on Capitol Hill. The meetings were allegedly organized by then White House Chief of Staff Mark Madows

According to the spokesperson, in the documents that the White House will have to deliver to the investigators, after the green light of the Supreme Court, there would be all the details – including the papers of the Secret Service – on Trump’s intentions to march on Capito Hill after the rally on 6 January 2021 and why the former president eventually decided to return to the White House instead

Jan 6 – Politician – Among the January 6 documents that Donald Trump’s lawyers tried to hide is a draft executive order from the president that would have given the Secretary of Defense full powers to seize the voting machines used for Election Day. Politico reports. The order never became effective. It is not clear who was the author of the text, dated December 16, 2020, but it is in line with the allegations of fraud launched in those weeks by one of the lawyers who were part of Trump’s entourage, Sidney Powell

Powell herself, former Security Advisor Michael Flynn, former administration attorney Emily Newman, and former Overstock.com CEO Patricky Byrne met with Trump in the Oval Office at the White House on December 18. . At that meeting, according to Axios, Powell pressured Trump to seize the voting machines

The order would have given the Secretary of Defense the power to “seize, collect and analyze all machinery, equipment and information stored electronically.” In addition, the secretary of defense was given a time of sixty days to draft a final document on the elections. A ploy that would have served Trump to stay in power well beyond the natural deadline, at least until mid-February 2021