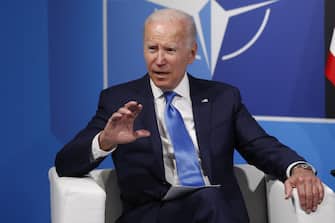 The US, in the framework of the new forces module decided at the NATO summit, is promising greater strengths for the security of Europe. “Putin – said Biden – was aiming for the Finland model for Europe and instead gets the NATO model”. That is the enlargement of the block with the entry of Helsinki and Stockholm, which today have officially become “invited” countries to join the club. An objectively historic result that Moscow has defined as “destabilizing”

No choice – The sanctions inflicted on Russia following the invasion of Ukraine have cost many NATO members but the alliance has “remained united”. So Joe Biden, in a statement alongside the King of Spain, Felipe VI, in the Hall of Columns of the Royal Palace of Madrid. Biden called the Russian invasion “the greatest abuse of power since World War II”. “Many thought that it would no longer happen in Europe and instead it did” added Biden, stressing that the clash with Russia was not “a choice”

Biden-Yeol-Kishida – Joe Biden also met with South Korean President Yoon Suk Yeol and Japanese PM Fumio Kishida on the sidelines of the NATO summit in Madrid to discuss strengthening trilateral cooperation across the Indo-Pacific, in particular regarding the threat posed by weapons of mass destruction and North Korea’s ballistic missile programs. Biden assured the two leaders of the United States’ unremitting commitment to defend Japan and North Korea

Abortion – The US Supreme Court decision on abortion “has a much greater impact” and beyond women’s rights. “After this decision the court could reconsider contraceptives or same-sex marriages.” This was stated by US President Joe Biden in a video meeting with Democratic governors, who added: “We do not have enough votes in the Senate to overturn the decision”

Abortion – After Louisiana and Utah, even in Texas a court temporarily blocked the ban on abortion after the complaint presented by the Center for Reproductive Rights, an association that defended the only abortion clinic in Mississippi in the “Dobbs v. Jackson Women’s Health Organization ”, on which the Supreme Court ruled on Friday, effectively abolishing abortion. This was reported by the lawyers of the Center. Abortions will resume with the strict restrictions imposed in the state before the sentence and then up to the sixth week

Abortion / Gun – A week after the Supreme Court’s shock ruling overturned New York state law severely limiting the ability to shoot armed, the dem-controlled Empire State Parliament responds with a new law banning carrying guns and rifles in many public places: among these subways, buses, parks, hospitals, hospices, stadiums and even Times Square. “We won’t back down, they think they can change our lives with the stroke of a pen, but we have pens too,” said Governor Kathy Hochul.

Jan 6 / Cassidy Hutchinson – Cassidy Hutchinson, former assistant to White House Chief of Staff Mark Meadows, said in her deposition before the parliamentary commission of inquiry into the assault on the Capitol on January 6, 2021, said she heard the latter say that the former president Donald Trump didn’t think the Capitol rioters were doing anything wrong, while Vice President Mike Pence deserved the chanting slogans calling for his hanging

Jan 6 / Cassidy Hutchinson – According to Hutchinson, Trump wanted to return to Capitol Hill during the onslaught of his supporters. The secret service initially tried to find a way to get the president back to the Capitol but then decided that was not the case. “I’m the president, take me there,” Trump snapped to his security chief, grabbing the wheel himself in the Beast, the presidential armored car. Trump also grabbed the man by the shoulders and then let him go

Jan 6 / Cassidy Hutchinson – Trump and his chief of staff were aware of the possibility of violence on January 6, 2021 and that the participants in the rally were armed. “I’m not here to hurt myself,” Trump allegedly said, insisting that the metal detectors be removed. Hutchinson revealed that another White House official, Tony Ornato, had warned the president of the presence of weapons. Meadows’ former aide recalled informing him of the violence and he ignored it, merely asking: “How much more does Trump have to talk?”

Trump’s reply – Donald Trump has responded to the testimony of Mark Meadows’ former assistant from his social media Truth accusing her of being “a total false and informer”. “I barely know her,” attacked the former president in a series of tweets in which he denies ever saying it was right to hang Mike Pence or grabbing the steering wheel of the presidential car to drive to Capitol Hill during the assault as instead testified by Cassidy Hutchinson. Trump also attacks the commission by calling it a “kangaroo commission”, a farce

Donors – Some of the Republican Party’s wealthiest donors are ditching Donald Trump and starting to support other potential candidates for 2024 like former Deputy Mike Pence and Florida Governor Ron DeSantis. What prompted them to change their minds would have been the latest committee hearings on the assault on Capitol Hill on January 6, 2021. “Donors are very concerned that Trump is the only Republican he may lose in 2024,” said Eric Levine, a lawyer who has long been raising funds for the Grand Old Party

Trump candidacy – Donald Trump would be willing to announce his candidacy for the 2024 presidential elections on Monday 4th July, Independence Day. Alex Jones, conspiracy theorist and reference of the American far right, as well as a great supporter of Trump, argues. The conductor cited sources close to the former president. “Donald Trump – he said – he is ready to announce his candidacy on Monday, which is a very special day. Try to imagine – he added – the political, cultural, economic and financial implications of such an announcement ”

Truth – A US federal grand jury has issued subpoenas for the board members of the company that is merging with the Trump Media & Technology Group, creator of Truth Social. The group agreed to merge with Digital World last October and were expected to conclude the deal by the second half of 2022. Both the Securities and Exchange Commission (SEC) and the Financial Industry Regulatory Authority are investigating the merger and this represents a blow to the tycoon’s plans

The news is likely to further delay the merger, which would provide Truth Social with $ 1.3 billion in capital, as well as a public listing. The app was launched after Trump was banned from Twitter, where he had more than 88 million followers. The Donald currently has 3.37 million followers on Truth Social

Also on the list is Sandra Lindsay, a New York nurse who was the first person to receive the Covid vaccine in December 2020. For McCain and Jobs it will be a posthumous recognition

Open! – The White House is again open for tours that were suspended in early 2020 due to the Covid 19 pandemic. It will be possible to visit the official residence of the US president and the seat of the presidency itself starting July 19 and Tuesday to Saturday, only in the morning. Access is free. The use of the mask is not required, however access will not be allowed to anyone who has been in contact, tested positive and has symptoms of Covid in the ten days prior to the visit