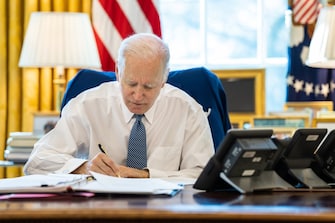 Phone call between leaders – Prior to the trip to Europe, Biden had a telephone meeting with Draghi, Macron, Johnson and Scholz in which “grave concerns about Russia’s brutal tactics in Ukraine, including attacks on civilians” were discussed. According to a note released by the White House, Joe Biden and European leaders “discussed recent diplomatic efforts in support of Ukraine’s attempt to reach a ceasefire”

United against unwarranted attack – “Today in Brussels I am meeting with our NATO allies, G7 members and the European Council to discuss our ongoing response to Russia’s groundless and unjustified attack on Ukraine. We are united in defense of democracy and with the Ukrainian people ”. President Biden added to these words, written on Twitter, a photo that portrays him together with all the leaders of NATO member countries

NATO Summit – “We discussed our commitment to strengthen the collective defense of NATO, especially on the eastern flank. NATO is strong and united ”: these are the words of Joe Biden at the end of the NATO summit. The president added that “Sanctions are never a deterrent but maintaining sanctions increases Russia’s suffering. This is what will stop him ”, referring to Putin

Biden in Bxl – Putin’s use of chemical weapons? “We will respond if he uses them, the nature of the response will depend on the nature of the use.” So Joe Biden in Brussels, at a press conference where he also said that “Russia should be removed from the G20”

Biden in Poland / 1 – “What is at stake is not only the defense of Ukraine but democracy in the world” said Joe Biden speaking to US troops in Poland, recalling that “we are in the midst of a battle between democracies and autocracies”. Immediately after disembarking in Rzeszow, about 100 km from Warsaw, Biden stopped to eat a piece of pizza with the 82nd Airborne Division soldiers based in Poland. In the meeting with the military, Biden sat at the table with them and served himself a piece of pizza without escaping some photos

Biden in Poland / 2 – In his conversation with President Andrzej Duda, Joe Biden thanked the Polish people “for having opened their homes and their hearts to neighbors who are in need”. This was announced by the White House in a statement stating that the United States “will continue to support humanitarian efforts” for Ukrainian refugees. The statement adds that Biden reiterated “the unshakable commitment to article 5 and the safety of all our NATO allies”

“In addition, the leaders discussed – concludes the note – our robust defense cooperation, US support for Europe’s efforts to reduce its dependence on Russia energy and achieve climate goals, and the democratic values ​​on which the transatlantic relationship ”

Biden in Poland / 3 – “A butcher ”: Biden defines Vladimir Putin in this way, after meeting a group of Ukrainian refugees in Warsaw. The president has openly said that the Russian leader should not continue to lead the country himself. “For the love of God – he said, speaking from Warsaw – this man cannot remain in power”. It is the most direct message, among those launched in recent weeks, in which Biden has called for a regime change in the Kremlin, and marks the definitive change in relations between Washington and Moscow

Prior to the US President’s speech, Secretary of State Antony Blinken said: “For us it is not a question of regime change. The Russian people must decide who they want to lead ”

Biden in Poland / 4 – “I am very impressed with the sincerity and openness of these people. It’s amazing to see all these kids just wanting a hug. I want to thank them, they make me proud, ”Biden said after the crowd at the National Stadium to meet the Ukrainians who fled to Poland. At the stadium, refugees wait in line to legalize their stay and to receive the equivalent of the tax code with which they will be able to access health care and other social benefits in Poland

Biden was accompanied by the Polish premier Mateusz Morawiecki and the mayor of the Polish capital Rafal Trzaskowski. The president, with a mask and a hat with a visor, spoke at length both with the Ukrainians and with the volunteers who offer aid to refugees. According to the new Polish law, refugees will have the right to stay in the country for up to 18 months (with the possibility of extending this period up to three years)

Biden in Poland / 5 – “Do not be afraid”, says the American president in Warsaw, quoting John Paul II, the Polish Pope. Biden said to the Russian people “You are not our enemy” adding, in a message addressed to everyone, “Let’s get ready for a long battle for freedom”

“With submarines” – “I would threaten Putin with nuclear submarines,” Donald Trump said in an interview with Fox News. “I’ve heard him constantly use the N word, the nuclear word. Oh, it’s a nuclear power, but we are a bigger nuclear power, we have the biggest submarines in the world, the most powerful machines ever built… ”.

Trump denounces Clinton – Donald Trump has filed a complaint against Hillary Clinton and other Democrats, accusing them of spying on her election campaign with the aim of manipulating the 2016 presidential elections. misconduct by Democrats who “acted to spread the narrative” that Trump was backed by a “foreign and hostile” country

The reference is to the news related to the alleged hacking attempt at Trump Tower to find connections between the tycoon and Russian oligarchs and banks. The person accused of attempting to hack Trump’s account was found to have a campaign lawyer for then-presidential candidate Hillary Clinton among clients.

Idaho – abortion law – Idaho Governor Brad Little has signed and enacted the bill banning abortion after the sixth week. A stringent measure, similar to the one in force in Texas. The White House criticizes the law “devastating to women in the state”. An “unacceptable” rule against which the Biden administration will continue to fight in support of women’s freedom of decision

Ketanji Brown Jackson – “All people accused of a crime have the right to defense. This is what makes our system the best in the world ”. You said the candidate to the American Supreme Court Ketanji Brown Jackson during the hearing on the Senate Committee that she has to confirm her. “Office lawyers don’t choose their clients,” she added. Jackson assisted in the defense of four Guantanamo inmates while she served as a public attorney

Sport & vax in NYC – Eric Adams gives in to pressure from the sports world a few weeks after the start of the baseball season and abolishes the obligation to vaccinate athletes. Even though the sport is practiced outdoors, New York City’s vaccination requirement was in place for any type of workplace, both indoors and outdoors. The announcement by the mayor of New York comes in the aftermath of the decision to eliminate the obligation of masks at school for children under the age of five from next April 4th

Egg roll is back! – The White House will host the traditional Easter egg hunt for children for the first time in two years since the start of the pandemic. This was announced in a note from the Biden administration, in which it is however specified that “the situation of Covid-19 will continue to be carefully monitored and the instructions of the experts will be followed”. The event is scheduled for April 18 and tickets for entry will be distributed with a lottery. The visit to the gardens of the White House is also back, which this year will be open on 9 and 10 April