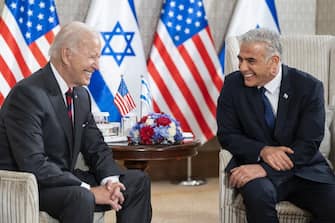 Without ifs and buts – The US is “no ifs and buts” for the security of Israel. President Joe Biden said this at the end of the meeting with Prime Minister Yair Lapid. “We have ensured, my administration – and I think the vast majority of Americans too, not just my administration – that we are fully committed to your safety, without a shadow of a doubt,” Biden added.

Great meeting – “Without a credible military option, it is not possible to stop Iran”: ex Prime Minister Benyamin Netanyahu said during a meeting with US President Joe Biden at the residence of the Head of State Isaac Herzog

“In the face of Iran – Netanyahu explained to the press – economic sanctions are not enough and not even a military structure of a defensive nature. We need a credible offensive military option. Without it it will not be possible to achieve anything, whether a diplomatic understanding is reached or not. And if this credible military option will not have a deterrent effect, then it must be activated. This – the Likud leader specified – is what I will do if and when I return to the prime minister’s office ”

Medal of Honor – “Israel will never be alone, the United States will remain by its side”. Thus Joe Biden receiving the medal of honor from the Israeli president Isaac Herzog. The American president reiterated that the “US is committed to the security of Israel”

“Safer Middle East” – Joe Biden praised “Saudi Arabia’s historic decision to open its airspace to all civilian carriers without discrimination, a decision that includes flights to and from Israel.” National Security Advisor Jake Sullivan said in a statement. “This decision – underlines the statement – is the result of the diplomatic efforts of the president with Saudi Arabia and opens the way to a more integrated, stable and secure Middle East, vital for the security and prosperity of the United States and for the security of Israel”

Biden – Abbas – President Joe Biden met Palestinian President Mahmud Abbas at the Muqata Palace in Bethlehem as the penultimate stop on his trip to the Middle East. After this meeting, the visit to Riyadh, in Saudi Arabia, a country that has recently adopted a historic decision: the reopening of airspace to all companies. A gesture considered a symbol of the Saudis’ rapprochement with Israel

Mutual commitment – Joe Biden and Abdel Fattah Al Sisi, Egyptian president, underlined their mutual commitment “for a constructive dialogue on human rights, an integral part of the strong US-Egypt partnership”: this is stated in a joint statement published on the White House website The two leaders “will continue to consult closely to ensure the promotion and protection of human rights and fundamental freedoms in the political, civil, economic, social and cultural fields”

Formal invitation – Joe Biden invited the president of the United Arab Emirates, Mohammed bin Zayed Al-Nahyan, to visit the United States. A friendly gesture after months of tense reporting on the war in Ukraine and other issues. “The challenges you face today make it much more important to spend time together. I want to formally invite you to the United States, ”Biden said after the two met on the sidelines of a meeting of Arab leaders in Saudi Arabia.

“You cannot impose US values ​​on other countries” – The Saudi Crown Prince, Mohamed bin Salman, in his interview with Joe Biden, told the head of the White House that he cannot impose his “common values” on all countries and that his action in this sense “is counterproductive” . The Saudi prince recalled that the US “made mistakes in Iraq and Afghanistan”

Kashoggi – According to Al Arabiya, Mohammad bin Salman expressed “regret”, but stressed that Saudi Arabia “has carried out all the legal procedures, from the investigation, to the trials, to the sentences and their application”. Even the US, the prince stressed, “made mistakes in the field of human rights”, added the prince, recalling in particular what happened in the Abu Ghraib prison in Iraq.

Biden 2024? – Nearly two-thirds of Americans think President Joe Biden shouldn’t be running for a second term in the White House. This is what emerges from a Yahoo News-YouGov survey, according to which only 18% of respondents support Biden. Among the Democrats, 41% are against the second term, but when asked who they would like instead of him, 30% cannot give a name. Only one in five voters point to Vice President Kamala Harris as an alternative. Among Republicans, 60% think Donald Trump should reapply in 2024

American hospitals must offer the possibility of abortion though … The woman is in danger of life. The Biden administration says so, noting that federal law on guidelines for emergency care replaces state regulations in states that are banning abortion after the Supreme Court decision

Trump 2024 – Donald Trump has decided on 2024: the only problem to solve is whether the announcement will be before or after the mid-term elections in November. This was stated by the former president in an interview with New York Magazine. “I’ve already decided. The real decision is whether to announce before or after “the November elections,” Trump said

Trump 2024 / Oath Keepers – If Donald Trump runs again and wins in 2024 he will try to “unleash a civil war among his followers, using lies and deceit”. The prediction comes from the former spokesman for the Oath Keepers, a right-wing extremist group considered to be among the organizers of the assault on the Capitol, on January 6, 2021. Jason Van Tatenhove made his deposition before the House committee of inquiry. “What else will he do if he is elected again?”, He added – no one can foresee it ”

Bolton on the events of January 6 – Former US National Security Advisor John Bolton admitted he helped plan coups in other countries, arguing that the January 6, 2021 uprising in Washington fell short. The attack on Capitol Hill was the result of Donald Trump “just stumbling from idea to idea,” Bolton told CNN’s Jake Tapper. “January 6 was not an attack on our democracy. It is Donald Trump who is taking care of Trump. A once in a lifetime event, ”Bolton said

2024 GOP Convention – Milwaukee, Wisconsin, mortgages victory in the race to host the Republican convention in 2024. The city has been recommended by an ad hoc committee of the party and now the formality of the decision is missing, which will be taken in the coming weeks by the president of the Grand Old Party Ronna McDaniel and the entire Republican National Committee. In 2020 Milwaukee hosted the Democrats’ convention (in very virtual form for the pandemic) and Joe Biden had won in Wisconsin

Goodbye Ivana – “I am very saddened to inform all those who loved her, and there are many, that Ivana Trump died in her home in New York”, wrote Donald Trump on his social Truth. “She was a wonderful, beautiful and formidable woman who led an extraordinary and inspiring life. Her pride and joy were her three children, Donald Jr., Ivanka and Eric. She was as proud of them as we all were of her. Rest in peace, Ivana! ”Added Trump

Possibility – “These images remind the world that America can do great things.” President Biden underlined this when presenting the first images from the Webb Telescope, the most powerful ever sent into orbit so far. “The word he defines for us is ‘possibility,’ added the head of the White House