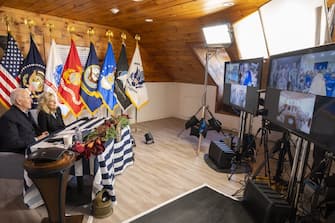 Thanksgiving in Nantucket – Forty-six years after the first time there, Joe and Jill Biden have decided to resume an old tradition and to spend the day of Thanksgiving and a few days of vacation in the oasis off the coast of Massachusetts. Nantucket recalls a long history. It was 1975 and the Bidens, with their sons Hunter and Beau, had received numerous invitations from friends, but the future president I think accepting them would have meant offending the sensibilities of others.

“I was in my office in the Senate – he wrote in 2017 – explaining this to the head of my staff. And he replied: “you need a nuclear Thanksgiving”, meaning only with the family unit, but with his Bostonian pronunciation I did not immediately understand what he meant and I thought about “nuclear”. Then he explained well: I had to spend it with my family, the four of us, and be alone. He suggested Nantucket Island, an hour by ferry from Cape Cod. Neither Jill nor I had ever been there, so we went ”

In Nantucket, the Bidens met with a representative of the Coast Guard. The President went to shake hands with each of the coast guards, lined up in three rows, chatting, followed by his wife, who exchanged a few words with the first in line

Friendsgiving – The President and the First Lady, before moving to Nantucket, visited military base in Fort Bragg, North Carolina. “For us you are like a family – said Biden – addressing the military but also their families, present at the base

Macy’s Parade is back! – The traditional Thanksgiving parade in New York, is back after a year of virtual parade, due to Covid: with thousands of people, fifteen colored helium balloons, with tributes to Baby Yoda, Pikachu and the Pokemon, 28 themed floats , more than 800 clowns, 10 marching bands, nine groups of entertainers and dancers, and with the 4,500 volunteers located along the five kilometers of the parade, from Central Park to Columbus Circle, to Macy’s department store on 34th Street and Herald Square, in the heart of Manhattan, passing through 6th Avenue

President Joe Biden phoned NBC live to greet the return to the live parade. “After two years – he said from Nantucket – we are back. America is back. There is nothing stopping us from doing it ”. All parade participants had to be vaccinated and wear a mask

Home for Thanksgiving – Air travel in the US is returning to pre-pandemic levels. Even in normal times, the vacation days around Thanksgiving, every last Thursday in November, are a sensitive time for airlines. This week has been a test for the sector since the beginning of the Covid emergency, because the TSA, the government agency for flight safety, expects about 20 million passengers to pass through security checks at airports in the 10-day period that began. more than seven days ago

Go vegan! – Billie Eilish appealed to Americans not to eat turkey this Thanksgiving in a story posted on her Instagram account. “Turkeys are among the kindest creatures in the world, but 46 million are killed every Thanksgiving,” wrote the singer, a vegan activist, posting a photo of her with a turkey in her arms. “I know it’s hard to change traditions but just remember it,” added the young artist, who has been following a vegan diet since she was 12.

Shalanda Young – Joe Biden has appointed Shalanda Young as head of the White House budget office, the first African American to fill this role. Nani Coloretti, who has Filipino origins, has been named his deputy. “It is my honor to name these two extraordinary women who will make history at the helm of the Budget Office,” Biden announced in a video message from Nantucket.

Omicron – The emergence of the Omicron variant underlines the urgency to renounce global patents on vaccines: this is what President Joe Biden said, in a note from the White House, inviting the countries that next week will meet at the World Organization of commerce, to reflect on the topic. The President also asked governments to be more generous in donating vaccines to poor countries

Omicron & restrictions – The United States will ban travel from South Africa and 7 other African countries by non-US citizens: the ban comes into effect from Monday and is a consequence of the spread in that region of a variant, the Omicron, which the WHO defined “worrying”

Executive order – New York state governor Kathy Hochul has declared a state of emergency in response to the new Omicron variant of Covid which threatens to reach the United States as well. Hochul also explained that the decision is linked to a number of infections in New York State which has returned to growth at levels never seen since last April. The goal is to increase bed capacity in New York hospitals and address the problem of hospital staff shortages

Ahmaud Arbery – President Biden welcomed the sentencing of three people for the murder of African American Ahmaud Arbery and stressed that “much work” remains to be done to ensure racial justice. “Although the guilty verdicts show that our judicial system is doing its job, this in itself is not enough,” Biden said in a statement, “instead we need to get back to building a future of shared unity and strength,” where no one fears violence for the color of his skin ”

Biden 2024 – Joe Biden intends to reapply in 2024. The American media reports, the spokesman of the White House, Jen Psaki, saying that the president plans to run again for the next presidential elections. For days there have been rumors about the possibility that Biden will not reappear in the 2024 elections, partly for reasons of age. The president turned 79 on November 20, and in 2024 he will be 82

Jefferson out – Exactly one month after the decision taken by the New York City Council, the statue of Thomas Jefferson, which had been located in the central hall of the New York administration since 1915, has been removed. A team of technicians worked for several hours to move the heavy statue, sculpted in 1833, from its pedestal and place it in a padded wooden crate, with which it was moved to the New York Historical Society. The request of the black and Latino advisers who contest Jefferson’s slave past is fulfilled

Trump – Rittenhouse – Trump met with Kyle Rittenhouse, the young man who killed two protesters last year during the Black Lives Matter protests in Winsconsin and who was acquitted. The former President, who had already congratulated the 18-year-old, himself gave the news that he had received him with his mother at his Palm Beach resort; and also circulated a photo of the meeting in Mar-a-Lago. Rittenhouse “should never have gone through this,” he later commented in an interview with Sean Hannity on Fox News.

White House Christmas Tree – “I am waiting for you next week to present the tree to you. In the meantime, be well, see you soon “. So Jill Biden, in front of the entrance to the White House, to the waiting reporters. At the White House you look at the parties: the First Lady, who for the occasion wore a red coat, welcomed the fir that, from December 5, will illuminate the White House: it is a tree of almost six meters arrived from Jefferson, North Carolina, chosen earlier this year by the presidential grounds and presidential gardens supervisor