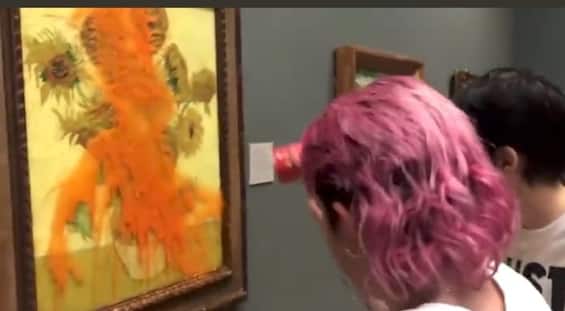 This morning two activists smeared Vincent van Gogh’s masterpiece “Sunflowers”, Kept in the National Gallery in London. The contents of two cans of soup were thrown onto the work. The demonstration, which was carried out in the framework of the anti-oil protest campaign, is not an isolated case. For days the environmental activists of “Just Stop Oil” have been choosing different targets to put pressure on the British government to change its environmental policy.

The Londoner Phoebe Plummer And Anna Holland of New Castle entered the museum wearing a t-shirt bearing the slogan “Just Stop Oil”, in Italian “Stop the oil”. After launching the tomato soup, Plummer spoke: “What is worth more, art or life?”, She said to the visitors. He also added: “Is it worth more than food? More than justice? Are you more concerned about the protection of a painting or the protection of our planet and people? “He also explained the reason for choosing the cans: “The cost of living crisis derives from the cost of the oil crisis – he continued – Fuel is inaccessible to millions of families who do not know how to get warm and are hungry. They can’t even afford to heat a can of soup. ”After giving the speech, Plummer and his partner glued their palms to the wall under the painting.

In the video you can clearly hear the voices of some visitors asking for security intervention. The two in their twenties were then arrested by Scotland Yard agents for aggravated violation and vandalism. However, van Gogh’s canvas was not scarred. Thanks to a very thin glass, which protects the painting, the liquid did not penetrate and the painting remained intact. Only the frame has been damaged, but to a minimal extent.

The context of the action

For days, raids have been going on all over the country. The choice of a masterpiece of world art, however, marked a turning point in the protests: the painting is one of the five versions of the same theme created by the Dutch artist and has an estimated value of 80 million euros. It is one of the most iconic works of nineteenth century painting and for this reason it is a symbol. “This is not The X Factor,” said the movement’s spokesperson Alex De Koning, thus justifying the gravity of the gesture: “We are not trying to make friends here, we are trying to make a change and unfortunately this is how changes happen.” The movement is growing rapidly both online and in the field. Every week he organizes around 20 meetings across the UK and is on the hunt for new recruits.