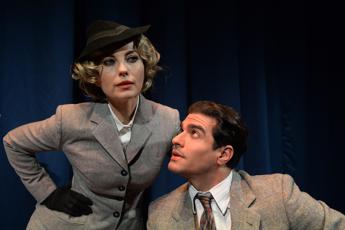 A self-respecting mystery reserves surprises until the last scene, written or acted; and the golden rule could not but be respected by the queen of detective stories, Agatha Christiealso for ‘Prosecution witness’the novel made famous by the film directed in 1957 by Billy Wilder and now staged, with the translation of Edward Grassat the Quirino theater in Rome until January 29, with Vanessa Gravina in the title role, flanked by Julius Corso and from Geppy Gleijeses who, in addition to signing the direction, replaces the unavailable Giorgio Ferrara at least until Sunday.

The story takes place between the office of a renowned lawyer and the courtroom, where a married man, or rather linked by a close marriage bond with a girl helped to escape from the communist area of Berlinwith which he now lives in London, with some economic problems, between odd jobs and more or less disguised layoffs. The woman becomes the key witness to confirm or deny the accused’s alibi.

“There is no doubt that ‘Witness for the Prosecution’ is the most beautiful judicial drama – says director Geppy Gleijeses, artistic director of the Quirino theater in Rome – The game doesn’t focus so much on the psychology of the characters, between occult simulators, alleged assassins, great lawyers; how about the perfection of an infernal mechanism, which creates one twist after another, in a crescendo alla Ravel’s Bolero, one joke after another. And the judicial reconstruction is truly impressive for its precision and truth, as if it had been written by the greatest English judge of the last century, for a creepy plot”.