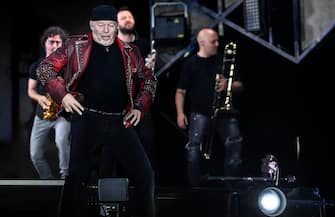 “You are an extraordinary sight and the Circus Maximus is a beautiful place“Vasco shouts happily, repeating the watchword of this tour which is” finally “. The first of the two evenings sold out for a total of 140,000 spectators – no one had ever made a double date before, not even the Rolling Stones – leaves you breathless despite the fact that the air is not very hot in the already torrid almost Roman summer.

“We will make the Circus Maximus explode with joy” he promised arriving on Saturday 11 in Rome and so it was in the name of music “which is the opposite of war because there is no war where there is music”.

Vasco Rossi in concert in Naples: we will make Maradona explode with joy

It is a lung that returns to breathe, that screams in unison the Circus Maximus that lives after two years of postponements and waiting, finally, for the concert by Vasco Rossi. And he, the gladiator, goes down into the arena with a smile on his lips and in the name of Russell Crowe greeted by a rock roar that makes the wrists tremble at the ruins that surround one of the most beautiful places in the world.

The public – including Maneskin’s drummer and guitarist, Bebe Vio, Claudia Gerini, Marco Damilano among the variegated VIPs – is not exhausted by this long wait, rather it is as always very excited and crammed everywhere in the immense sloping lawn around the gigantic stage that stands out. in the center in a real explosion of lights (1500 lighting bodies) and music with an audio power of 750,000 watts.

Vasco Rossi in concert in Milan at the Hippodrome with an audience of 80 thousand people. PHOTO

Vasco does not spare himself for over two and a half hours allowing himself only a small break, starting from the new XI commandment and ending, as always, with his heart in his hand and the audience now voiceless for the immortal Albachiara.

Vasco, out of the live video of the song XI Commandment made in Trento

Vasco does not forget his hymn to peace – because “the war is against humanity” – (and to females) even if it is mainly his songs that speak.

Vasco Rossi in concert in Trento: “No to war, we want peace, love and music”

In “Some say no” with which he reiterates his “Fuck the war! Stop the war!” and the very current “Gli spari sopra” in solidarity with those who are suffering from a war that has no meaning at all: behind her a gigantic metaphorical tentacular octopus appears.

The concert is a journey through time, from the most recent album that is almost everything (the last one is “We are here”), to hits like “The rain on Sunday”, here in the original version (the one with Marracash is on the digital platforms for Save the Children) and the newly released single, “L’amore amore”. Unreleased in concert the recent ones: “Se ti potessi dire” (2020) and “A love song thrown away” (2021) or even pearls pulled out of the trunk of the 80s: “Love help”, Blasco ’82 doc.

There is no shortage of “A sense”, “Stupendous”, “We are alone”, “Without words”. Then in the third part the atmosphere becomes intimate. You fly high, very high from “Close Bumps of the Third Kind”, change at the bottom: Torre descends, Andrea Torresani, and Gallo rises, Claudio Golineli, guest star. Chills with unexpected surprises such as “Toffee” unplugged vibe. And then again “Sally” (the images of five women of five different nationalities will speak on the big screens). For the final fireworks: “It’s just us”, “Reckless life”, “Song” and of course ” Albachiara “.

Vasco Rossi, an ‘extended’ band for the Live 2022 tour. The post

Vasco Live then continues on June 17 in Messina (Stadio San Filippo), on June 22 in Bari (Stadio San Nicola), on June 26 in Ancona (Stadio del Conero) and closing on June 30 in Turin (Stadio Olimpico). All sold out, for a total of over 676,000 tickets sold.