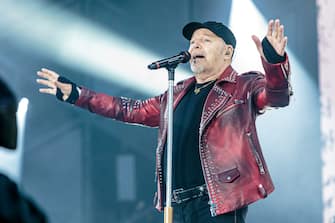 Vasco’s live, which holds the absolute record for concerts at the Milan stadium, was, as announced by the artist himself on social media, a “mega party”: 80 thousand at the Hippodrome attended the great party singing together with their long-time idol

Vasco Rossi in concert in Trento: “No to war, we want peace, love and music”

Yesterday in Milan, for this concert postponed twice (initially it should have taken place in the Mind area in the I-Days on 15 June 2020 and subsequently on 13 June 2021), the opening of the lines of the subway 1 and 5.

Vasco Rossi in concert in Milan: lineup and everything you need to know

Vasco’s words in front of the enthusiasm of the fans: “This enormous affection that still reaches me today after 40 years still leaves me amazed. And you can see that I sowed well”.

Vasco performed in front of an audience that, as always, manages to unite different generations, parents, children, grandchildren, all for him with the same desire to sing

Vasco, out of the live video of the song XI Commandment made in Trento

Vasco Rossi turns 70, the best wishes from the VIPs on social media

The stage is huge, magnificent and imaginative. A story within history. On the other hand Vasco underlines that the enthusiasm of the public of him is his gasoline.

From Sally to Susanna, Vasco Rossi and the women told in his songs

Vasco’s message is a message that says no to war, “we want peace, love and music”

Blasco opened its Live ‘022 tour with a special event at the Trentino Music Arena.

All the news on Vasco Rossi

Under the stage, the banner of living music, love and life

Vasco Rossi: “The Rolling Stones taught me the power of provocation”