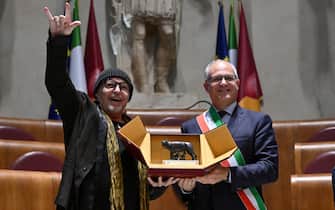 Vasco Rossi received today, Wednesday 9 November, the she-wolf of gold. The artist withdrew the statuette at the Capitol, from the hands of the mayor of Rome Roberto Gualtieri

WATCH THE VIDEO: Vasco Rossi in Rome at the premiere of the concert film

“Receive this precious statuette it is a great honorRome I have conquered you. I wanted to dedicate this recognition to my father. He drove the truck and took the fruit to the general markets: he left at 2-3 am for Rome. He has not seen all this, this extraordinary adventure that I have lived. I am proud and proud “, said Vasco Rossi receiving the Capitoline Wolf

Vasco Rossi presents the film and announces the tour

L‘I arrive by Vasco Rossi in the Capitol

Vasco Rossi and Roberto Gualtieri they also overlooked one of the balconies of the Campidoglio, seat of the Municipality of Rome

Vasco Rossi in concert at the Palermo stadium in June 2023

“Pannella was one of the people I always met when I came to Rome. He was the last great radical. Always active in the defense of civil and individual rights. I always remain attached to him. I am the Pannella of the songalso for me civil and social rights are important “, said Vasco Rossi at the Campidoglio

Vasco Rossi, all the news

The motivation for recognition is also linked to this commitment: “You have not only thrilled millions of Romans with your songs, but you have shown in your career that you are always sensitive and attentive to the needs of the least: from the struggles against racism, to the commitment during pandemic yesterday and the war in Ukraine today. Rome is a city that has a strong anti-fascist vocation and peace, which leaves no one behind and she fully embodies these ideals ”

A moment of ceremony at the Capitol

Before the delivery of the Lupa d’Oro there was a surprise duet between the rocker from Zocca and the mayor of Rome. Upon his arrival at the Campidoglio, Vasco Rossi was welcomed in the mayor’s room: Roberto Gualtieri, who always has a guitar available, accompanied the singer on the notes of “Albachiara”

“I’m proud of this recognition that I will put together with the others. I am touched, seriously, the motivation is beautiful and moving too. Rome? It is an extraordinary city for us who come from outside, the Eternal City “, said Vasco Rossi in the past few hours, before receiving the Golden Wolf.

L’I arrive by Vasco Rossi in the Capitol

Vasco Rossi returned to the capital for a three-day Roman holiday. The occasion was, yesterday, the preview of the event movie Vasco Live – Rome Circus Maximuswhich will then be in 300 theaters on 14, 15 and 16 November.

Vasco Rossi and Roberto Gualtieri to the Capitol

Vasco Rossi leaves the Capitol after receiving the Golden She-wolf

The artist said he was ready to restart Vasco Live e announced eight new dates, in four cities, for next summer. It starts from the Bologna stadium on June 6 and 7, then the Olimpico in Rome on June 16 and 17, the Barbera in Palermo on June 22 and 23, the Arechi in Salerno on June 28 and 29