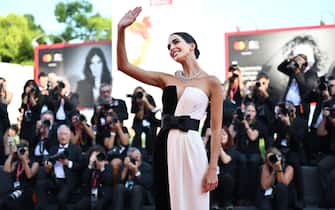 Parade of stars for the opening night of the Venice Film Festival, seventy-nine edition. Rocio Morales, godmother of the event, chose a two-tone look to present the inauguration ceremony in the Sala Grande, an event that will see the awarding of the Golden Lion for Lifetime Achievement to the icon of French cinema Catherine Deneuve

The dress, a very elegant Armani Privé model, is an archive dress from the Winter 2008 couture collection

Total black doubled dress, instead for Leila Hatami. The Iranian actress is one of the members of the jury of this edition

In black also another excellent juror, Audrey Diwan. The director and screenwriter chose a dress with a contrasting collar and cuffs and a sequin belt

The Venice Film Festival told with the pills from the Luce Archive. VIDEO

WATCH THE VIDEO: Venice Film Festival 2022, what we know

The make-up of the diva is the work of Kay Montano and enhances, with an absolutely natural effect, her complexion and her timeless beauty

Jodie Turner-Smith, in the cast of White Noise, a film in Competition, sported a personalized Gucci look for the prestigious red carpet. The actress, very faithful to Alessandro Michele’s creations, avails herself of the collaboration of the stylist duo Wayman + Micah. Gloves in the same color as the gems of the necklace

Red dress for the red carpet for Catherine Deneuve, one of the most anticipated of the evening. The world-famous French diva chose an essential line dress with front slit to receive the Golden Lion for Lifetime Achievement

Greta Gerwig and Noah Baumbach, one of Hollywood’s most acclaimed couples, are also in tune in terms of style. For the evening dedicated to White Noise they both choose the dark suit

Transparencies are undoubtedly one of the trends of the season and could not be missing on one of the most prominent red carpets in the world. Here are the choices (from left) of Elisa Sednaoui, Bianca Brandolini D’adda and the top model Mariacarla Boscono, respectively in Ermanno Scervino, Giambattista Valli and Jean Paul Gaultier. Tulle and sequins, the materials of choice

A creation in very thin plissé with a crossing of front drapes and cape sleeves. This is Mélanie Laurent’s Gucci look for her first red carpet of this edition

Bright pink, one of the favorite shades of celebrities this and last season. Alessandra Ambrosio enchants the audience with her statuesque physique with her light dress with coordinated cape

Barbara Palvin, another beautiful in the fashion world, sported an interesting mix of red and black for her Armani Privé look. The dress is part of the summer 2019 collection while the hairstyle is the work of the international hair artist Owen Gould

Adam Driver, star of White Noise, is one of the most anticipated faces of the day. Very elegant, in a tuxedo, he stopped to sign autographs for fans before entering the room

Another total red look for the carpet that opens Venice 79: it is worn by Emma Chamberlain and it is a Valentino dress from the 2007 season. Cartier jewels are on the neck, arm and lobes.

Among the most photographed, for elegance and audacity, Greta Ferro, with a grand evening dress in tulle and velvet from the 2016 Armani Privé winter collection

Surprisingly, with a blue caftan, Hillary Clinton appeared on the red carpet in Venice to receive recognition for her non-profit organization, Vital Voices Global Partnership

On the red carpet, the former US secretary of state chatted with the Minister of Culture Dario Franceschini

American supermodel Grace Elizabeth convinced everyone with her ultra chic look. For her, an Alberta Ferretti mermaid dress with Crivelli jewels

Rocio Morales was accompanied by Roberta Armani for her first major red carpet at the Mostra. Her partner Raoul Bova is also expected in the next few days

Paola Turani chose Roberto Cavalli instead. The hairstyle with natural waves has taken up the wild spirit of the dark dress entirely embroidered with beads and sequins

Nude shades for Matilde Gioli who shines in her precious Giorgio Armani dress. The make-up is Armani Beauty too

Also in red Pixie Lott who posed with her husband Oliver Chesire. A Giorgio Armani look for her too

Among the most effective looks, certainly that of Raffey Cassidy in Maison Valentino. The dress, from the winter 2022 collection, with a feather skirt, was complemented by bright fishnet stockings as presented on the catwalk last July