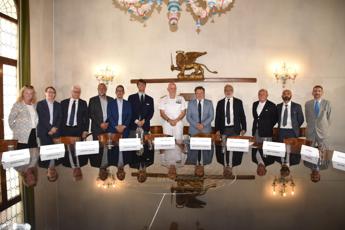 Reduce the impact of atmospheric emissions from cruise ships arriving and mooring in the ports of the Venice Lagoon. With this objective, the Municipality of Venice, the Port System Authority of the Northern Adriatic Sea, the Port Authority of Venice and the shipping companies operating in Venice and Marghera signed the voluntary agreement ‘Venice Blue Flag 2022’ this morning at Ca ‘Farsetti. . The agreement takes on greater importance in a context modified by the limitations to cruise traffic in the San Marco Basin and the Giudecca Canal, introduced by the Decree-Law of 20 July 2021, n. 103, which led Venice to have to build a new cruise model with the challenge of reconciling the needs of environmental sustainability and safeguarding the lagoon with those of labor protection and the development of this important economic sector.


The document signed for the first time in 2007 was ratified in 2008, 2009, 2013, 2015, 2016, 2017, 2018, 2019 and in 2021. “The big news this year – explained Massimiliano De Martin, councilor for Environment of the Municipality of Venice – is that we managed, despite the difficult period, to sign this agreement once again and it was not at all obvious. For this I want to thank on behalf of the whole city and the entire territory of the lagoon gutter all those who have worked to achieve this result, despite the pandemic, the war and the exorbitant increases in the cost of fuel “.

“Ports and cruises are going through a very complex but also challenging moment that we must face by paying the utmost attention to the delicate lagoon environment. Finally, I want to underline the need to operate in a coordinated way between Ports: to give stability and safety to operators, it is necessary that in Italy we operate in a unitary way, without the Italian port systems competing with each other, but acting together for a common purpose ”concludes De Martin.

On the basis of this agreement, the shipping companies undertake to operate the main and auxiliary engines of passenger ships with fuel for marine use with a sulfur content not exceeding 0.1% by mass and this not only at the mooring, but also during navigation before entering the Vts Venice area and during all maneuvering phases within the port area of ​​Venice (Venice and Marghera); the same commitment assumed, starting from 2018, also for tugs during operations related to the transit of ships.

“The ratification of this agreement sees institutions and shipping companies united in the name of sustainability and in the application of good environmental practices – added Fulvio Lino Di Blasio, president of the Port System Authority of the Northern Adriatic Sea – and certifies the commitment that Venice is pursuing on these issues. As a function of this and in an extraordinary and unprecedented situation, the Port Authority and the commissioner structure, with the fundamental support of the territory, have managed to kick off the season and are working on the development of a new cruise model that precisely in these days, with the first two provisional landings in Marghera fully operational, that of Fusina and that of Chioggia, it is showing its first tangible results. Not only that, the port aims to win the challenge of sustainability also by increasing its vocation as an energy hub “.

Admiral Pellizzari highlighted how commercial and cruise traffic operators need to have certainties in order to operate and plan in the medium and long term. He also recalled that the Maritime Authority has continued to guarantee high standards of effectiveness and efficiency while working within a complex port lagoon system, home to regulated ports, never forgetting environmental sustainability as the Blue Flag agreement certifies.