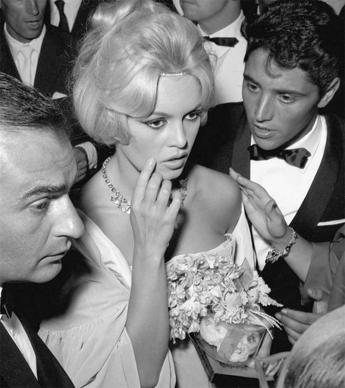 They have marked eras, have amused, sometimes caused a sensation but, above all, excited, great actresses who have always distinguished themselves for their passion for cinema, but also for their independence and professionalism.

They are style icons that have marked eras, that have amused, sometimes caused a sensation but, above all, excited. The actresses who have made the history of Venice, a city of timeless beauty despite having just turned over a thousand and 600 years old, have walked the Lido red carpet with charm, elegance and talent. From Katharine Hepburn to Anna Magnani, the godmothers of the Venice Film Festival have always stood out for their passion for cinema, for their independence and professionalism, edition after edition. The first woman in the world to receive what was at the time the prestigious Mussolini Cup during the second edition of the Venice Film Festival in 1934, was Katharine Hepburn.


Talented, daughter of a suffragette and raised in a family that has always encouraged her to say honestly what she thought without fear, Katherine won by playing the revolutionary Jo March in Little Women, one of the most famous films in the history of international cinema. Only three years later the Bette Davis Eyes enchanted the Lido with charm and talent by giving two Volpi Cups (the new name of the Mussolini Cup) in the same edition to the American actress Bette Davis, who thus established a record still unbeaten.

Loved, expressive and unforgettable in Pier Paolo Pasolini’s Mamma Roma was Anna Magnani, the first Italian woman to receive the Coppa Volpi in Venice as best actress. She won it thanks to her interpretation of her with The Honorable Angelina, and from here began her rise in the national and international film scene that will take her up to the night of the Oscars. A few years later, close to the sixties, three real stars of international cinema landed here, in the magic of what was once the island of Lido.

Together, in the same edition, Brigitte Bardot, Gina Lollobrigida and Sophia Loren stole the show from their colleagues, transforming Venice into a real movie set in which they were the leading actresses. BB of her belonged to her at her debut, which did not win her any victory but consecrated her as an actress and, above all, her style icon. Gina, on the other hand, was at home in Venice, one of the first actresses to make Italian cinema famous abroad. However, 1958 was the year of Sophia, who with Orchidea Nera won the Volpi Cup, starting her career as a successful actress.

In the Olimpio of the winners during the golden decade there are also Claudia Cardinale and Monica Vitti. The first, which has always been contested by two cinema giants such as Luchino Visconti and Federico Fellini, and the second, muse of Michelangelo Antonioni and companion of Alberto Sordi’s adventures. Both received the Golden Lion for Lifetime Achievement in the early 90s for marking an era and, without a doubt, the history of Italian cinema. Among them also Marlene Dietrich, Silvana Mangano, Giulietta Masina, Shirley MacLaine and Catherine Deneuve.

Talented, classy, ​​and often counter-current, these performers have left an indelible mark on the history of Venice and its Film Festival, leaving an unrivaled legacy to the actresses of the future.