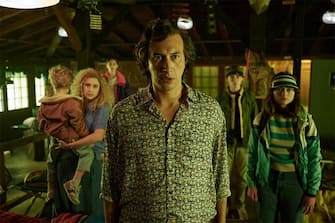 On 31 August at 7 pm the appointment is with the film that opens the Venice Film Festival. It is about White Noise by Noah Baumbach, with Adam Driver, Greta Gerwig, Don Cheadle. The film is a black comedy with horror nuances based on the 1985 novel of the same name by Don DeLillo

Also on Sunday 31 August the Horizons section of the Venice Film Festival opens the film Princessdirected by Roberto De Paolis. The film tells the story of a young Nigerian illegal immigrant who prostitutes herself on the edge of a big city

Venice Film Festival 2022, 5 Italians in competition: the program of the 79th edition

Thursday 1st September it’s up to Tar. The film, directed by Todd Field, stars Cate Blanchett as a musician who became the first female conductor of a large German orchestra

All the news about Cate Blanchett

Also on September 1st will be screened Bardo, false chronicle of unas cuantas verdades, The new film by Mexican director, winner of five Academy Awards, Alejandro G. Iñárritu. The story is that of a famous Mexican journalist and documentarian who returns home to overcome an existential crisis

On Friday 2 September, the public will be able to see one of the most anticipated films of this edition of the Festival: Bones and AlL, directed by Luca Guadagnino and played by Taylor Russell, Timothée Chalamet, Mark Rylance, André Holland, Chloë Sevigny, Jessica Harper, David Gordon Green. The film is the film adaptation of the novel of the same name by Camille DeAngelis

Bones and all will be distributed by Vision

Days of the authors, all the films on the program

The screening of the documentary is scheduled for Saturday 3 September All the Beauty and the Bloodshed by Laura Poitrasl, focused on the life of photographer Nan Goldin who with her shots told the LGBT world in 360 degrees

The 3rd is also the day of the delivery of the Golden Lion to director and screenwriter Paul Schrader. For the occasion it will be screened Master Gardenerthe thriller starring Joel Edgerton and Sigourney Weaver

Sunday 4th September is the day of I eat your heart, the film that marks Elodie’s acting debut. Directed by Pippo Mezzapesa, the work is freely taken from the homonymous book by Carlo Bonini and Giuliano Foschini published by Giangiacomo Feltrinelli Editore, the screenplay is signed by Antonella W. Gaeta, Pippo Mezzapesa and Davide Serino

On September 4, she will also be the protagonist of Penelope Cruz, principal interpreter of The immensity, the film by Emanuele Criales. Set in Rome, in the 1970s, the film talks about a world suspended between neighborhoods under construction and variety still in black and white, social achievements and outdated family models. Clara and Felice have just moved into a new apartment. Their marriage is over: they no longer love each other, but they can’t break up. To keep them united, only the children on whom Clara pours all her desire for freedom

Another Italian film will be screened on September 4th. This is dthe Monica by Andrea Pallaoro. It is the story of a woman who returns home for the first time after a long absence. Finding her mother and the rest of her family, from which she had distanced herself as a teenager, she embarks on a path in her pain and fears, in her needs and in her desires until she discovers within herself the strength to heal. the wounds of one’s past

On Monday 5 September, perhaps the most anticipated film of the entire Venice film exhibition will be screened. We are talking about Don’t Worry Darlingthe psychological thriller directed by Olivia Wilde and starring Harry Styles and Florence Pugh, who play the role of Jack and Alice, a happy couple, settled in the community of Victory, in the middle of the Californian desert

On September 5th it will be possible to see also The Banshees of Inisherin, a film by Martin McDonagh. Set on an island off the west coast of Ireland, the film follows two longtime friends, Padraic (Colin Farrell) and Colm (Brendan Gleeson), who find themselves in a stalemate when Colm abruptly decides to end their friendship. Confused and devastated Padraic attempts to rekindle their relationship with the support of his sister Siobhan (Kerry Condon)

The Banshees of Inisherin, the first photos of the film with Colin Farrell in competition in Venice

Tuesday 6 September appointment with Tiilda Swinton, protagonist dthe The Eternal Daughterthe film directed by Joanna Hogg, tells the story of a middle-aged daughter and an elderly mother, who return to their old family home, an old estate that has become a hotel now almost completely empty but full of mysteries

Also on day 6, it’s up to The Lord of the ants by Gianni Amelio. Interpreted by Elio Germano and Luigi Lo Cascio, the work reconstructs the story of Aldo Braibanti, accused in the Italy of the sixties of having plagiarized, psychologically and physically, one of his students

The Son is the film that will be screened at the Venice Film Festival on Wednesday 7 September. Florian Zeller’s film tells the story of Nicholas (Zen McGrath), who two years after his parents’ divorce, still seventeen, decides that he can no longer live with his mother. The boy manages to fight depression only by taking refuge in childhood memories, the happiest period of his existence so far. This is how his mother Kate (Laura Dern) decides to leave him to his father, Peter (Hugh Jackman), who in the meantime has redone a family

Thursday 8 September is the day of Blonde. Based on Joyce’s bestseller Carol Oates, Blonde boldly reinvents the life of one of Hollywood’s most legendary icons: Marilyn Monroe. From her childhood her unpredictable her as Norma Jeane, through her rise to fame and love affairs, Blonde mixes reality and fiction to explore the ever-widening difference between the actress’s public and private image. Written and directed by Andrew Dominik, the film boasts an extraordinary cast starring Ana de Armas alongside Bobby Cannavale and Adrien Brody

Blonde, the teaser trailer of the film with Ana De Armas in the role of Marilyn Monroe

On day 8 it will also be possible to see Drought, the film by Paolo Virzi with Monica Bellucci, Sara Serraiocco, Silvio Orlando, Valerio Mastandrea. The story is coveted in a Rome where it hasn’t rained for three years. The lack of water distorts rules and habits. In the city that is dying of thirst and prohibitions, a chorus of characters moves, young and old, marginalized and successful, victims and profiteers. Their lives are linked in a single mocking and tragic design, as they each seek their own redemption

On Friday 9 September the last Italian film in competition at the Venice Film Festival will be screened, that is Clear, directed by Susanna Nicchiarelli. The film tells the life of Saint Clare and her meeting with Saint Francis

Chiara, a clip from Susanna Nicchiarelli’s film in competition in Venice 79

Saturday 10 September is the turn of The Hanging Sun – Midnight sun, a film directed by Francesco Carrozzini that closes the 79th Venice International Film Festival. Based on the novel Midnight Sun by Jo Nesbø, is a noir thriller set in the rarefied atmosphere of the Norwegian summer, where the sun never sets. Written by Stefano Bises, it stars Alessandro Borghi, Jessica Brown Findlay, Sam Spruell, Frederick Schmidt, Raphael Vicas, with Peter Mullan and Charles Dance. Photography is by Nicolaj Bruel


“The Hanging Sun”, the Sky Original film will close the Venice Film Festival out of competition