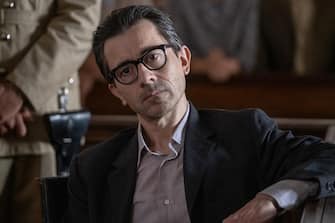 Gianni Amelio takes us back to the sixties, when in our country it was enough to be homosexual to end up in a courtroom as a defendant. This is what happened, in 1968, to the poet Aldo Braibanti. To give him the face of it The lord of the ants is Luigi Lo Cascio while Elio Germano plays the journalist who tries to unmask the farce-trial

Darren Aronofsky has brought almost all of his films to Venice, even winning a Golden Lion for The Wrestler. This time he comes back with The Whale, the story of a teacher suffering from a form of obesity who tries to reconnect with his daughter. After artistically resurrecting Mickey Rourke, Aronofsky tries this time to revive Brandon Fraser’s career

The masterpiece of maximalist reading White Noise it is adapted to the cinema by Noah Bauambach, already appreciated in Venice with Story of a wedding. Also this time the protagonist of the film is Adam Driver, the pivot of a family story that expands to ask universal questions

The immensity is the film that Emanuele Crialese has been waiting to make for years. Here too we are faced with a family history of fragile equilibrium. In the Rome of the seventies, a couple stays together only for their children but, when the eldest realizes that they need a drastic change, everything will crumble quickly. The film is one of the three Italians in competition and stars an international star of the caliber of Penelope Cruz

The immensity of Emanuele Crialese, the protagonist will be Penelope Cruz

After winning a César Award for Best Short Film with Vers la tendresse, Alice Diop is now confronted with the direction of her first feature film. Saint Omer was born from an event that Diop really witnessed and tells the trial of Laurence Coly, a woman accused of killing her fifteen-month-old daughter, abandoning her when high tide arrives on a beach in northern France.

Ana De Armas puts on a blonde wig and decides to face perhaps the most complicated challenge for an actress: to impersonate the film icon par excellence, Marilyn Monroe. Blonde is the fictionalized story of the brief existence of a woman born as Norma Jean and born from the book of the same name by Joyce Carol Oates

TÁR it is the story of another great artist (but in this case it is a fictional character) who had to struggle to emerge. This is Lydia Tár, in fact, the first woman to become the conductor of one of the most important German orchestras. Director Todd Field said he thought of Cate Blanchett in the lead role from the start

The New Boy, the new film with Cate Blanchett

A space for Asian cinema could not be missing, which has always been highly valued in Venice. Japanese director Kōji Fukada brings to the lagoon Love Lifeanother story of a family that will see its unity undermined by an unexpected event

BARDO, false chronicle of unas cuantas verdade it is first and foremost a journey backwards made by Oscar-winning director Alejandro González Iñárritu in his past. Impossible not to see a bit of him in the character of Silverio, an appreciated photographer and documentary maker who finds himself dealing with what was there before once back in Mexico

Now in his third feature film as a director, director Romain Gavras takes Greek tragedy to a banlieue with Athena. A film that tells of a community forced to always live with the feeling of being in a perennial state of siege

Bones and All reunites Luca Guadagnino and Thimotée Chalamet after the worldwide success of Call me by your name. Also in this film at the center there is a complicated love story, the one between Maren and Lee, two young people now almost used to living on the margins

The Eternal Daughter is yet another film of this edition that focuses on memory and family. Her Golden Lion for Lifetime Achievement Tilda Swinton returns to her home where she grew up with her elderly mother. The house has now become a hotel but this is not enough for the two women to bury the secrets that hide those walls

Shab, Dakheli, Divar (Beyond the wall) is one of the representatives of the ever-flourishing Iranian cinema in this edition. Vahid Jalilvand, former director of the acclaimed The doubtthis time it tells the story of a blind man who, thanks to a woman and her imagination, will rediscover the will to live

The spirits of the island (The Banshees of Inisherin) by Martin McDonagh revolves around a question: “What to do when someone decides to unilaterally end a relationship?”. Colin Farrell and Brendan Gleeson are two lifelong friends. From one day to the next, one of the two decides to end any kind of relationship with the other, for no apparent reason. Attempts to mend the relationship by the “abandoned” will only lead to tragic consequences

Argentina, 1985 it’s not just a movie. It is an important testimony that unearths pages of history that are too often covered up, even in the South American country itself. Santiago Miter’s film retraces the battle of Julio Strassera and Luis Moreno Ocampo, two men who courageously investigated the darkest period of the military dictatorship in Argentina without fear of the consequences. Among the protagonists of the film is perhaps the greatest living Argentine actor: Ricardo Darín

Clear is yet another portrait of a woman out of the ordinary in Susanna Nicchiarelli’s filmography. After conquering the public with films such as Nico 1988 And Miss Marxthis time the director dedicates herself to the figure of Chiara of Assisi (played by the young Margherita Mazzucco de The brilliant friend)

A bit like The Eternal Daughter or BARDOalso Monica is the story of a homecoming after years. A backward journey that awakens fears and traumas but from which one can return better

Bears don’t exist is the second Iranian film in competition. It tells two love stories that must survive in a society where loving each other freely seems so difficult. The author of this trip, the award-winning director Jafar Panahi, will not be able to physically accompany his film to Venice: he was in fact arrested on 12 July on charges of endangering the country’s security with his opinions.

Nan Goldin is undoubtedly one of the greatest photographers and tout-court artists of the twentieth century. Author of works such as The Ballad of Sexual Dependency, in which he portrays his friends representing them with beauty and raw tenderness, Goldin is one of the most interesting characters on the artistic scene currently in life. Laura Poitras thinks so too, who since 2019 had been working with Nan about her on a documentary about her. A testimony that now exists and is called All the Beauty and the Bloodshed

A couple it was shot in twenty-three days but tells thirty-six years. It is the story of a marriage between two normal people, even if his name is Leo Tolstoy. A union made of ups and downs and enriched by thirteen children, nine of whom survived

Florian Zeller after the success of The Fatherwhich even earned him two Oscars, returns to deal with family dynamics in what is the second chapter of a trilogy: The Son. Here the return of a son upsets the life of a man, eager to make up for lost time so as not to resemble his absent father. In the cast Hugh Jackman and Anthony Hopkins, already with Zeller in the previous film

French-Moroccan actor and director Roschdy Zem (Mister Chocolat) in Le Miens tells the story of two brothers. Moussa and Ryad are different in everything: one is a kind of saint while the other is a self-centered person loved only by his brother. When Moussa has an accident he starts to say everything that comes into his mind without filters and the situation will end up reversing.

Les enfants des autres is the second film in which we find Roschdy Zem, this time only as an actor alongside the wonderful Virginie Efira. The Belgian star plays a forty-year-old with a happy life who, when she falls in love with Ali, soon becomes fond of her little girl too. Treating the children of others as one’s own, however, has some drawbacks and the protagonist of the film will soon realize this