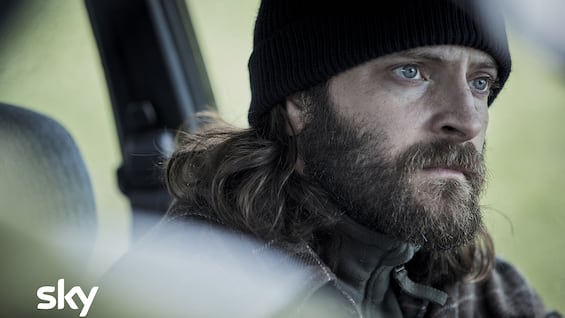 On the images of The Hanging Sun – Midnight sun the 79th Venice International Film Festival closes (FOLLOW THE DIRECT). The film will be released in cinemas from Monday 12 September to Wednesday 14 September and soon exclusively on Sky Cinema and streaming only on NOW.

Based on the novel “Midnight Sun” by Jo Nesbø, is a noir thriller set in the rarefied atmosphere of the Norwegian summer, where the sun never sets. Written by Stefano Bises, it stars Alessandro Borghi, Jessica Brown Findlay, Sam Spruell, Frederick Schmidt, Raphael Vicas, with Peter Mullan and Charles Dance. The photograph is by Nicolaj Bruel (DFF).

The film – by Sky Original – is an Italian-British co-production, produced by Cattleya – part of ITV Studios -, Greenland and Sky. The international distributor is NBCUniversal Global Distribution on behalf of Sky Studios. The Italian cinema distributor is Vision Distribution. The film will be in cinemas on 12, 13 and 14 September and will soon be available exclusively on Sky Cinema and streaming only on NOW.

We are in a large port in Northern Europe, in the middle of the night, when John decides for the first time to disobey his father Dad and to flee far away. The criminal life to which his father led him is no longer for him and he shivers at the thought that, after all, that is the only existence that Dad has ever prepared him for. John reaches a village of a few souls in the Far North, where the sun never seems to set, and he hides in a cabin in the woods waiting for the documents to continue his escape. But Dad can’t give up the only son he really cares about: time to reconstruct his whereabouts and find his whereabouts, and his brother Michael is ordered to go and retrieve him. In this suspended time and with his brother on his trail, John meets Lea and her son Caleb. Lea is a young fisherwoman who for years has been abused by a violent and alcoholic husband, Aaron, who recently lost his life at sea in unclear circumstances. Like John, Lea too leads a life in the shadow of her father, Jacob, the pastor of the country who has always forbidden her attitudes that do not conform to Christian morality. As the days go by, the three are getting closer. For Lea John he is the first man able to give her protection, without depriving her of her freedom, for Caleb an unexpected father figure to whom to tell his world and John himself seems to glimpse in this encounter the possibility of a redemption and a new life. Inevitably, they begin to feel like a new family. And as Michael gets closer and closer to his brother, the circle also tightens around her father Leacon who wants to trap her again in a life he doesn’t want.

Lea and John will have to succeed in emancipating themselves from their respective fathers;

only in this way will they be able to put an end to a painful past and finally open up to the unexpected possibility of a new life.

“The Hanging Sun, – Midnight Sun” is a great international production, a new story by Sky Original that follows the path of excellence that unites our products, and is a project in which all those elements that define the quality of the products coexist. our original productions. There is the literary matrix of Jo Nesbø, one of the most respected contemporary authors in the world, who has provided us with a story of great impact, capable of speaking to a global audience. There is the brilliant and creative talent of Francesco Carrozzini, which we are happy to have supported in his first directing experience in a feature film. Then there is the synergy with established partners such as Cattleya and Groenlandia, the impactful writing of Stefano Bises, who was able to update the story well, and an excellent cast, in which we are particularly happy to find an extraordinary interpreter like Alessandro Borghi, flanked by two stars of the caliber of Charles Dance and Peter Mullan and talented actors such as Jessica Brown Findlay, Raphael Vicas, Fred Schmidt and Sam Spruell. It is a project we are really proud of and we are honored to have been chosen as the closing film, Out of Competition, of the 79th Venice International Film Festival. “

“Being able to associate great Italian talents, the ambition of international productions and original stories that have a global value is one of the most genuine satisfactions that come from working on Sky Studios products: in” The Hanging Sun – Midnight Sun “we are happy to find Alessandro Borghi, who, already from his brilliant performance in Diavoli, shares with us a path based on the common taste of relaunching challenges and broadening horizons. With him an extraordinary international cast with Jessica Brown Findlay, Sam Spruell, Frederick Schmidt, Raphael Vicas, Peter Mullan and Charles Dance. And we are equally happy to baptize the talented Francesco Carrozzini, a director of rare sensitivity, taste, elegance, for his first feature film. We have also been able to count on the impeccable writing of Stefano Bises, solid and authoritative, who has ferried Jo Nesbø’s intimate and profound thriller to a current destination. An exciting challenge realized with the extraordinary work of our partners in Cattleya and Greenland and the distribution support of NBCU and Vision Distribution to bring this story to the widest possible audience. We are honored that this film has been selected to close the 79th Venice International Film Festival, in one of the places that most celebrate the passion for cinema. “

“The genre has always been at the center of Cattleya’s production, both serial and cinematic.” The Hanging Sun – Midnight Sun “fits into this research, but it does it in its own way. It is a special film that defies definitions . Here, in fact, the genre is used to stage a deeper story and delve into the past of the protagonists. And so crime becomes the only way to love and be loved, escape the means to free oneself from destructive fathers, the mystery is the attempt to compress pain and erase one’s own identity. A story with a yes noir atmosphere, but with an important sentimental component, which speaks, without shouting, of family, love, a sense of belonging and the importance of choices. from the beautiful book by Jo Nesbø, “The Midnight Sun”, which fascinated us right from the start. And it continued with the deep writing of Stefano Bises and the great visual talent of Francesco Carrozzini, to his first direction of a feature film thu. And an exceptional cast that embellished the film. Finally, Norway, a fundamental ally: its incredible landscapes, the light, the sense of isolation, the primordial contact with nature have been a constant source of inspiration and enrichment for everyone. We are happy to have shared this path with Sky and Greenland, attentive and stimulating production partners, with whom it is possible to try little-traveled paths and always go a little further. This time we have arrived in Northern Norway. “

“The Hanging Sun – Midnight Sun” is a project that immediately thrilled us, representing everything we like to produce in Greenland: a genre story with a strong authorial component, supported by a large international production, taken from the bestseller by a formidable writer and characterized by strong and deeply human feelings. Stefano Bises’s screenplay also helped make the narrative even more powerful. A unique cast, with a European team of great talents, led by a visionary director, with empathic and powerful language, which we hope will speak to viewers from all over the world. Filming in Norway was not easy due to the climatic difficulties; cold and unstable weather forced us to change the plans more than once, but we are really happy with the final result. In addition, the well-established synergy between Sky, Cattleya and Greenland is a further reason for satisfaction, and gives us the certainty of being able to bring to the public a film capable of entertaining, moving and addressing topics that are very close to contemporary feeling. “

The words of the director Francesco Carrozzini

“When I first read Jo Nesbø’s novel I was in California and nothing could have been further from the scenarios described: noir, infinite but claustrophobic and at the same time mystical. I was immediately touched by the story of friendship between John, whose childhood has been interrupted, and Knut (who is called Caleb in the film), an already somewhat adult child John sees himself in. I also loved very much the fact that John and Lea, Knut’s mother, fall in love without All the work I did on myself and consequently on the film was a bumpy, surprising and cathartic journey, in which I became a father and learned what it means to be a son. strengthened this path by helping to solidify a sentimental drama with the cement of noir. Working with giants such as Charles Dance and Peter Mullan and with incredible actors such as Alessandro Borghi, Jessica Brown Findlay, Raphael Vicas, Fred Schmi dt and Sam Spruell was not only an honor but an incredible school, I owe it to them if I discovered firsthand what it means to make movies, a dream I had since childhood. I was also lucky because, thanks to the courage of the producers, we shot in the places where the novel comes from. Spending three months on an island in Norway making a film was like living in a parallel world, from which it would have been difficult to return to reality, if it weren’t for the birth of my son, a few days after filming ended. a film causes a great sense of nostalgia, a better reason if that film is the first and you don’t know the emotions that run through you. I’m happy though, it’s just the beginning. “