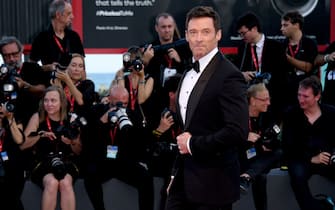 Charming as only he knows how to be, Hugh Jackman, already very elegant at his press appointments, focuses on Tom Ford, the master of the tuxedo, for his Venetian crowd. The result is obviously impeccable. Vote 9

Laura Dern, co-star of Jackman in The Son, gives his favor to the timeless Armani blue. Her dress with structured skirt, entirely doubled with a mesh with brilliant decorations, is part of the Privé Fall / Winter 2022 collection. Further embellished with Bulgari jewels, it deserves a full 9

For her big day at the Venice Film Festival, the gorgeous Vanessa Kirby brought with her a Maison Valentino wardrobe. The evening red carpet dress is a true diva Couture creation in a perfect shade for her very pale complexion. Vote 9

But it is the Maison Valentino look, adopted for the arrival at the morning press conference, that makes the star of The Crown And Pieces of a Woman the highest grade of the day in terms of fashion: a suit with 3D floral decorations, top plus pencil skirt with slit and coordinated overcoat, so refined that it does not need any accessories. Thanks to the choices of her stylist, Ryan Hastings, the actress deserves a 10

Venice Film Festival 2022: report cards to the looks of the stars on the red carpet

With Laura Dern, Gabriela Hearst’s creations also make their appearance at the Venice Film Festival. Her crochet dress, very trendy this season, is a winning choice for the day. Vote 8

Tilda Swinton returns to the red carpet leaving her admirers stunned this time for the unusual sobriety of a black evening dress, a shade she doesn’t wear often. The truth is that we love her in every way and this Alaia dress gives her a lot. Vote 9

WATCH THE VIDEO: The most beautiful dresses seen at the Venice Film Festival 2022

How to stand out among all the others with a total black on a red carpet where dark clothes are the most popular? By choosing the right brand to get noticed, of course. Natasha Poly in Dolce and Gabbana, dress with boned corset, skirt with super slit, seductive gloves and a beauty look that enhances the eye, wins our favor. Vote 9

The red carpet of Venice 79, transparencies and nude looks PHOTOS

Casey Afflek and Caylee Cowan are certainly not new to couples’ red carpets and once again show that they have learned their lesson in coordinated looks. In black, both are super elegant for the premiere of Dreamin’Wild. Vote 8

Pink dress with a perfect fit for Jacquelyn Jablonski. The top is a vision in Dany Atrache and Bulgari jewelry. For her, the grade is 8

Red carpet shoes, the most beautiful views at the Venice Film Festival PHOTO

A cascade of liquid sequins for Sara Sampaio who often chooses dresses of this type for her special red carpets. No news, therefore; the execution was rewarded. Grade 7

Sophie Codegoni and Alessandro Basciano became the protagonists of a romantic moment on the red carpet, the setting for a surprise wedding proposal. Super photographed, for obvious reasons, they bring home an 8 for their evening looks, very suitable for the event

Venezia 79, marriage proposal on the red carpet for Sophie Codegoni

Zooey Deschanel, female lead of Dreamin ‘Wild, made an appearance in Dolce and Gabbana, a very light blue dress made for her by the designer duo. A little retro, of course, but in line with her way of dressing that she always winks at the vintage style. Vote 8

Morgan Cohen, TikTok star born in 1997, really seems to be the owner of one of the most prestigious red carpets in the world and with her black dress with high slit, sandals with feathers and a classic style crop, she passes the look exam with a score of 9

Deschanel’s most original look of the day is undoubtedly the one she exhibited at the press conference in the morning. The actress gracefully wore a Dolce and Gabbana high fashion creation from the 2012 season with decorative shoes and a delightful handbag. Simply enchanting. Vote 8

One day early, Ana De Armas arrived at the Lido to take part in the world premiere of Blonde, the film that sees her as Marilyn Monroe. But before getting into the style of the most popular diva in the history of cinema, the actress allows herself a very contemporary look, a navy blue Louis Vuitton suit with blazer and high-waisted shorts that gives her a lot. Vote 9