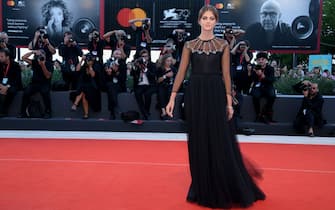 Margherita Mazzucco, protagonist of Clear, a film in competition at the 79th Venice Film Festival, was the brightest star on the red carpet of the penultimate evening of the Festival. The nineteen-year-old, whose image is curated by Marvi De Angelis, wore a gorgeous Gucci evening dress with plumetis tulle and silver embroidered details. Very refined and bon ton. Vote 9

Much loved by his peers also for his style choices, curated by Sara Castelli Gattinara, Andrea Carpenzano, alias Francesco d’Assisi in the latest story by Susanna Nicchiarelli, chose Fendi for his great Venetian evening. For him the grade is 8

The most beautiful couples seen on the red carpet. PHOTO

In the cast of Clear there is also Carlotta Natoli, very elegant for the premiere of the film. About her Her high fashion dress by her Antonio Grimaldi, with worked bodice and tail for special occasions, is worth a 9

Susanna Nicchiarelli, appreciated director of Clear, has relied on Missoni, more precisely on a knitted model of the iconic brand with a texture worked with lurex yarn, to make a truly exciting evening even more unforgettable. The choice is original and deserves an 8 in the report card

Venice Film Festival 2022: the report cards to the looks of the stars on the red carpet

For her latest release before the evening of the award ceremony, the godmother of the Rocio Festival Muñoz Morales, who didn’t miss a shot in terms of style, chose to shine with a look signed by Daniele Del Core all light, flounces and transparencies, for which a high tail was chosen more than apt. For her, her grade is 9


WATCH THE VIDEO: The most beautiful dresses seen at the Venice Film Festival 2022

Dior dress by Maria Grazia Chiuri from the Cruise 2023 collection inspired by Andalusia for Mina Kavani, Franco-Iranian actress, at the Festival with the film Khers nist (Bears don’t exist). The look, not easy to wear, enhances her complexion and her natural beauty even more. Vote 9

The red carpet of Venice 79, transparencies and nude looks PHOTOS

Latest releases also for Tessa Thompson who during the show really enjoyed herself with the clothes, all effective and theatrical, selected for her by the stylists Wayman and Micah. For her appearance at the Lido in the morning, the actress wore a checkered dress by the English Emilia Wickstead with Giuseppe Zanotti sandals. Less convincing than in her evening appearances. Rating 6

Thompson again sported an extravagant suit with colorful inserts by Ronald Van Der Kemp. Here, too, the choice of him raises some perplexity. Rating 6


Red carpet shoes, the most beautiful views at the Venice Film Festival PHOTO

Sometimes a black dress with a slipped design can be the best solution to not go wrong on the red carpet and the right jewelry and an appropriate beauty look can make the difference. Nilufar Addati does everything perfectly with her Chiara Boni dress and Leo Pizzo diamonds. For her, the vote can only be 9


Venezia 79, marriage proposal on the red carpet for Sophie Codegoni

The Copenhagen Cowboy platoon of interpreters arrived on the red carpet in Venice elegantly dressed by Prada. For Liv Corfixen, Danish actress and documentary maker, wife of director Nicolas Winding Refn, a dress with a fairy flavor and refined decorations in silver sequins. Vote 9

Lola Corfixen, daughter of the award-winning Danish director, also wore Prada. For her elegant dark and shiny suit, with contrasting sandals, her grade is 8