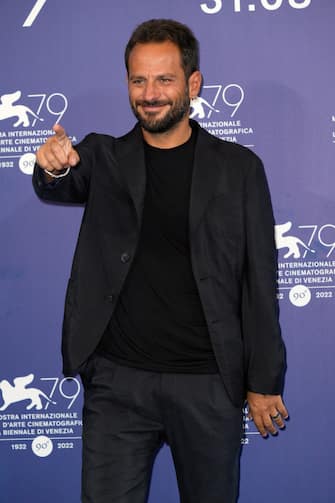 Pippo Mezzapesa is running in the Horizons section with the film I eat your heart. The director recounted the film in the profile on the Venezia 79 website: “The double soul of this story, made of ruthlessness and passion, is all contained in the title of the film. On the one hand, an archaic and ferocious society, dominated by the violence of primitive laws that regulate ancient mafia feuds never really extinct, on the other hand the power of love that upsets and subverts, a spark that ignites a new war but also the desire for a different life ”

Elodie is the protagonist of the film I eat your heart in which she plays Marilena, a woman who does not surrender to a destiny already written. The work marks the singer’s film debut

A photo of the arrival of the director Gianfranco Rosi, present out of competition in Venice 79 with Travellinga film about Pope Francis

The report cards of the looks of Venice 79: Isabelle Huppert dark lady from 9. PHOTOS

Space then to Francesco Di Leva, actor of the film by Pippo Mezzapesa in competition in the Horizons section

I eat your heart also sees in the cast Francesco Patanè, here posing for photographers

This fifth day of the Venice Film Festival also sees Michele Placido present, again for the film I eat your heart

The report cards of the looks of Venice 79: Isabelle Huppert dark lady from 9. PHOTOS

Let’s continue with another name of the cast of the film by Pippo Mezzapesa, namely Tommaso Ragno

Here is a photo of Giancarlo Commare’s arrival at the Venice Lido. The actor is present with The rag doll by Nicola Conversa

Monica, family and gender identity at the Venice Film Festival. The review

A photo of Lidia Vitale in front of the photographers’ flashes. The actress starred in I eat your heart

Venice 79, Leone d’Oro to Paul Schrader: who is the director of American Gigolò. PHOTO

Can Yaman has landed at the Lido. The Turkish actor is among the most followed artists by the Italian public

Drusilla Foer poses for the photographers of Lido di Venezia 79

The Venice Film Festival told with the pills from the Luce Archive. VIDEO

We continue with a photo of Francesca Chillemi

Gabriele Mainetti, among his most popular films They called him Jeeg Robot and Freaks Out