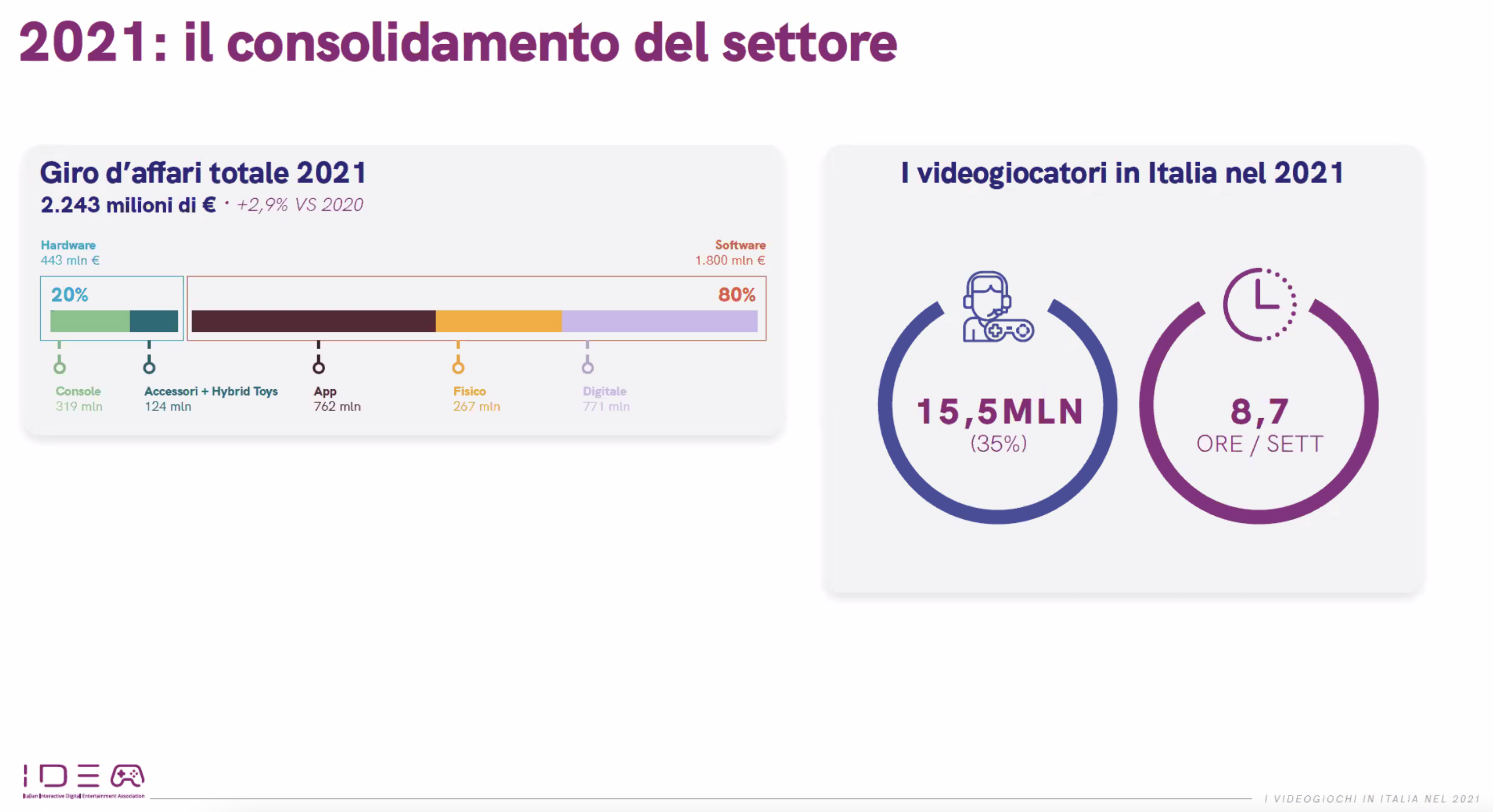 The IIDEA annual report on the sector in Italy: the three best-selling games are FIFA 22, GTA V and FIFA 21

IIDEA, the Association representing the video game industry in Italy, presented i data on video game consumption in our country in 2021. If 2020 was a record year, thanks to the pandemic, the sector continues to record positive numbers with a turnover of 2 billion and 243 million euros, up 2.9% compared to the previous survey. The number of gamers appears to be slightly decreasing with 15.5 million people, or 35% of the Italian population aged between 6 and 64, who have spent part of their free time playing video games. However, the involvement in the medium has grown: an average of 8.7 hours per week were devoted to video gamesespecially on consoles, a good half hour longer than in the previous analysis.


Regarding the turnover of 2021, the software segment is reconfirmed as the strongest in the market with a value of 1.8 billion euros, thanks to the excellent performance of digital and apps. On the hardware front, given the extraordinary performance of the next gen consoles which recorded an increase of 21.6%, the console sector recorded a turnover of 443 million euros with a growth of 12.1%. The aggregate Top 20 (all platforms, physical and digital) of the best-selling video games in 2021 is led by FIFA 22followed by Grand Theft Auto V And FIFA 21. The best-selling video game genres in 2021 were action, sports and RPGs for the blockbuster titles on consoles, while strategy and action / adventure lead the top 10 for best-selling video games on PC. 73.4% of video games released on the Italian market and 65.8% of games sold in Italy in 2021 are suitable for audiences between 3 and 12 years old.

In 2021 the number of gamers recorded a slight decline compared to the previous year, with 15.5 million people who tried their hand at video games during the year, or 35% of the Italian population between 6 and 64 years old, of which 56% men and 44% women. The age groups in which video games are played the most are those between 15-24 years and between 45-64 years which respectively register 3.7 million gamers within them. The time dedicated to video games continues to grow year on year, showing a greater involvement than in the past of Italians towards the videogame medium. In the course of 2021, an average of 8.7 hours per week were dedicated to video games on all devices, with a significant increase in the time dedicated above all to consoles (about an hour more on average per week), while the time allocated to gaming on smartphones and tablets recorded a slight decrease compared to 2020. As regards the most used gaming platforms, mobile devices such as smartphones and tablets are all the rage, with 9 million Italian gamers using them, including 4.2 million women. This is followed by PCs and home consoles with 6.9 million users. The segment of portable consoles, used by 1.4 million people, resists. Italian gamers get information by talking to relatives and friends (34%), from generalist (24%) and specialized (12%) press sites, from TV (24%) and social media (22%). The favorite social platforms to talk about video games are WhatsApp and Facebook (chosen by 20% of the interviewees), followed by YouTube (14%).

“In 2020, driven by the restrictions due to the pandemic, the consumption of video games in Italy had recorded an all-time high, exceeding € 2 billion for the first time. This year, thanks to the easing of emergency measures and a gradual return to normality, we would have expected to record a slowdown and instead we celebrate a new extremely positive result for the whole sector “, said Marco Saletta, President of IIDEA. “Analyzing the data, it is clear that we are witnessing a progressive increase in the presence of video games in the daily life of millions of Italians, with a real consolidation of the consumption of one of the most interesting and innovative entertainment media”.

The data contained in the report were processed as part of thepermanent observatory on the sector promoted by the European federation of the videogames industry ISFE (Interactive Software Federation of Europe, ISFE), of which IIDEA is a member. The research sources used are different: Sparkers, GSD (Games Sales Data) for retail data relating to the physical market, GSD and GameTrack by Ipsos for data relating to digital products, App Annie and Game Track for data relating to the mobile market . Consumer data, collected in the fourth quarter of 2021 by GameTrack, are based on the administration of an online and an offline survey on a representative sample of the population aged 6 to 64. Juan Insausti Alonso De Celada, Account Manager Iberia & Italy at Sparkers commented: “The physical market has been led by the new generation of consoles, recording a growth of 4.5% year on year. In addition, we have observed a slight decline in software sales, caused by the lack of AAA releases mainly due to two factors: on the one hand the publishers are waiting for a greater number of consoles distributed on the market, on the other hand there have accumulated delays due to the pandemic. When the new generation of console will have completely taken over the previous generation, we expect significant growth for the software sector “.

“2021 promised to be a less prosperous year for video game consumption after the record figures of 2020. Instead, Italian gamers spent more time playing video games than the previous year, especially on consoles”, said Eduardo Mena. Research Director of Ipsos MORI. “This increased involvement in video games has boosted the industry throughout 2021, largely thanks to gaming on next-generation consoles (PS5 and Xbox Series) and Nintendo Switch. Smart devices have increased their popularity and have been used. by 58% of Italian gamers. However, consoles have recorded an important end of the year that we are sure will have a direct impact on 2022 “.