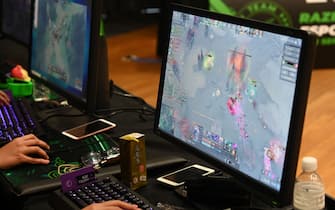 How and how much do kids play video games? A picture is provided by “Gaming”, the survey conducted byNational Association Di.Te. (Technological addictions, GAP, cyberbullying) in collaboration with the portal Skuola.net on a sample of 1,271 aged children between 10 and 25 years. More than 7% play video games for more than 8 hours a day and, among these, most are boys between 22 and 25 years old

Technological addictions, expert advice on how to recognize and treat them

The data also shows that more than a third of the sample (36%) plays between one and three hours a day, and about 16% pass in front of the screen between 3 and 5 hours. The complete report will be presented during the Fifth Di.Te. National Day, “It’s not just a game”, held on November 27 in Mestre

Splinter Cell Chaos Theory, the third installment of the series for free on PC

“Video games are also a way to experience parts of oneself“, He says Giuseppe Lavenia, psychologist, psychotherapist and president of the Di.Te. But, he adds, “that 7% of the sample spend more than 8 hours there is a fact must make us think. The fact “that they spend all those hours attached to a video game can also mean that try to isolate themselves not to fully experience sociality, preferring that mediated by videogames “to” build an image more similar to the one they would like ”

ALL NEWS ON VIDEO GAMES

“Just under one in 10 young people pass every week at least 24 hours, a whole day, playing video games: a fact that gives us an idea of ​​how the metaverse is not a future vision but a concrete reality for many of our children and girls. Because unlike what most people think, the passion for gaming is not only male, on the contrary, “he emphasizes Daniele Grassucci, co-founder of Skuola.net

And he adds: “The courtyards of the condominiums empty and instead the servers for online gaming are filled: for 1 in 4 young people it is customary to make an appointment with their gaming party to play together. But a new pastime is also emerging: almost 1 in 3 young people spends more than 6 hours a week watching others, the good ones, playing ”

Knowing playing well becomes very important as an element of social affirmation and, also for this reason, the custom of investing sums of money – sometimes notable – to buy virtual goods within videogame platforms

“About 2 out of 3 young people have done it at least once, more than 1 in 10 do it often and willingly”, continues Grassucci. An expense that, in some cases, can become expensive: “60% of gamers have paid out, in the last six months, more than 50 euros in this type of business; over 1 out of 3 put us at a minimum of 100 euros. And if we think that the passion, time and money spent in the gaming world are inversely proportional to age, we are very wrong: the more you grow, the more you play”, Underlines Grassucci

For some of the kids who took part in the survey, video games are gods mood regulators: 34.6% use video games to get out of boredom, 33.6% to acquire skills, and 11.2% to create a parallel reality, 20.6% to meet new people. “Like all the technological tools we have at our disposal, they can find good and bad aspects. Much lies in the intent and awareness with which we use them ”, observes Giuseppe Lavenia

Another fact starts from the evaluation of the impact that video games have on commitment and academic performance. For 33.7% the time spent playing has worsened their interest in school, for 34.1% it has weakened the commitment to continue the educational path and for 31.3% it has lowered their academic performance

Finally, if you ask the boys how much it is important for them to play well and to establish themselves in video games, more than 35% respond that it is “enough”, 15.5% say “a lot” and 6% “very much”. The rest of the surveyed consider it “unimportant” (25.5%) or “not at all important”; once again a minority (18%)