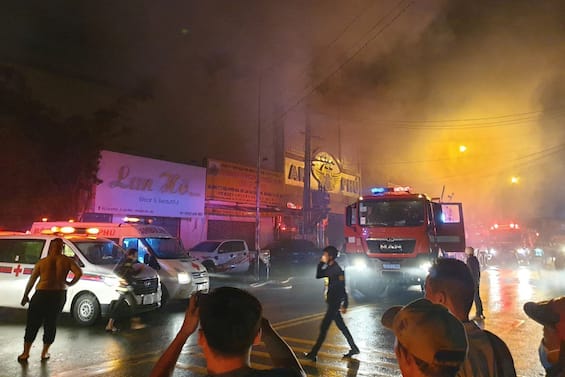 Dramatic toll in the stake in a karaoke bar in Binh Duong province, in southern Vietnam. At least 12 people died and 7 were injured, including two in serious condition, following the fire last night. Local authorities announced it. “Rescue teams are on site looking for the victims. The cause of the fire has not been determined and is under investigation,” said official Nguyen Thanh Ham. The flames broke out at around 9pm (local time) in the An Phú karaoke bar in the city of Thuan An. More precisely, on the second and third floors, spreading rapidly through the soundproofing foam with which the walls were lined and trapping customers and staff inside, according to Vietnam News.

The intervention of the firefighters

The exits of the karaoke bar, which has 29 rooms and a built area of ​​over 1,500 square meters, were closed when the fire broke out and panic spread among the many customers and staff. “Many people fled through the main entrance, but many others jumped out of the building breaking their legs and hands,” a witness said. Many clients have been rescued when they were already unconscious from suffocation. Thirteen fire trucks along with 66 officers intervened on the spot to put out the fire.

This is the deadliest fire in Vietnam since a residential building in Ho Chi Minh in 2018, which killed 13 people. Earlier, in 2016 another similar tragedy, in which 13 people died, occurred in another karaoke bar, in the capital Hanoi, after which the authorities began to inspect nightclubs, suspected of ignoring safety rules. base, across the country. In August, three firefighters died in yet another fire in a karaoke bar in Hanoi.