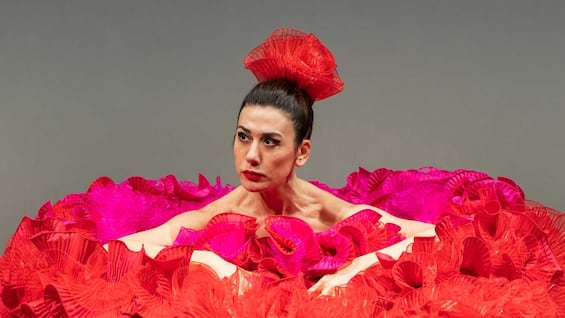 Grew up in an amusement park, breathing life since she was a baby, embraced by a world that for those who frequent it is a dream and for those who live there is a dream to donate. All children want rides, the children of the rides are a house in an apartment building. Virginia Raphael door to the theatre Samusa, more than a show, a human comedy, colorful and sulphurous, where the masks become human and humanity fades away. Certainly there are imitations of her, condensed in the finale, with the exception of Patty Pravo who mutters words and memories of “amove” immersed in a grotesque representation. If I think of Variety, that of Macario and Dapporto, of Alighiero Noschese and Wanda Osiris, Lauretta Masiero and Renato Rascel, Isa Barzizza and Delia Scala up to Bice Valori and Franca Valeri after having seen Samusa at the Teatro Valli in Reggio Emilia (repeats tonight, Saturday 14 January, and tomorrow, Sunday 15, at 8.30pm and 3.30pm respectively) I would like to state that Virginia Raphael fathered both millennial son.


Almost two hours on stage to stage a show which, written together with Giovanni Todescan, Francesco Freyrie, Daniele Prato And Federico Tiezzi (who is also the director), “as amazes as a roller coaster ride and more confusing than a walk among distorting mirrors”. We meet absurd characters who could cross our path every day. To each of them Virginia Raphael it gives a caricatured brushstroke that does not however cover the essence of the character. On the many souls who lodge in Samusa, trying to dodge the shots of the shooting gallery, spreads speckled brushstrokes and not a covering carpet. In the finale Ornella Vanoni and Carla Fracci, Belen Rodriguez and Sabrina Ferilli arrive to close the tour on the Ferris wheel to seal a secular liturgy (even if a papal and papal shadow hovers in the theatre) of memories that make you smile and reflect. Thinking of the monologue that she delivers over the phone to her invisible but cumbersome friend Luigina (among improbable recipes of chicken cacciatore and veal with tuna sauce), and which is a moment of neorealism 2.0, one must say that Virginia Raffaele represents what is missing in our daily lives: a nice ride on the carousel…ah…ah..ah!