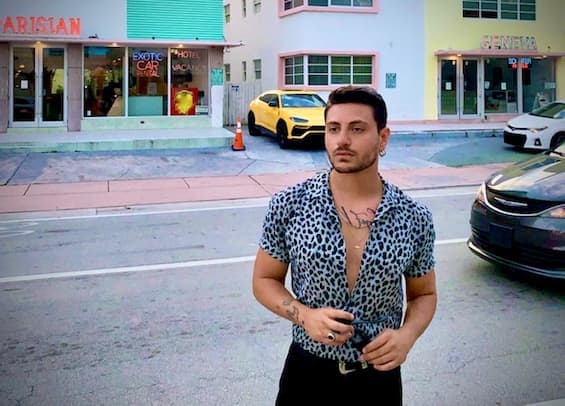 His rule is to amaze. And it does so also in this summer 2022 Virginio Simonelli. The single It enchants me it is not the usual hymn to life, but a song for those who no longer want to make plans, for those who want to enjoy the moment they are living, for those who do not necessarily want to promise themselves forever. Virginio says that after such intense two years we must all be more flexible and not fossilize too much on planning for the future. Virginio lately divides himself between Italy and America following a parallel path started in You love me a few months ago and which is bringing him more and more to be known overseas. But he does not deny his Italic origins. Italy remains his world while that in America is a path he started thinking about when I won the Latin Grammy as author for Laura Pausini’s album Hazte Sentir / Fatti Sentire. Also for this reason, It enchants mesingle written by the same Virginio with Diego Mancino And Daniele Chorus has a Latin influence. A world that the singer-songwriter has always explored, but with which he had never ventured as in this song.

Virginio let’s start with the choice of Enchant me as a single of the summer.

I wrote it with Daniele Coro and Diego Mancino and I felt it was the right one to tell my new path in America and Latin America. Publishing it was an ongoing decision also because we are working on the next releases in other markets. However, I am Italian and it is important to compare myself and make music for those who follow me here despite beautiful things happening outside.
Why are you talking to a generation that doesn’t want to program? How has the perception of time changed in the last two years?

The human being tends to plan the future but an aspect of our life tells us to consider that change is an integral part of daily life. We just think that the permanent job no longer exists and while the older ones can be disoriented, the young people accept the change, they are more prepared. The song is a bit of a party compared to the moment we live in. With the future changing under our eyes, the present remains.
The cover has an American shop in the background: why didn’t you do everything in Italy? The video was then shot in Miami …

Talk a little to everyone. It is also easy to translate into Spanish. For those who worked on it, it was easy to guess the meaning of the song. We focus on relying on life, on avoiding robotic projection into the future.
Paraphrasing Alessandro Manzoni … Adelante Pedro, with juicio.

It is the right synthesis of my thinking.
Starting from the end, what triggered the revolution from within?

Speaking of myself, I recognize that in the last two years I have understood many things. I started a new path with my label and my team that allowed me to focus my artistic side, to understand my uniqueness. Writing a lot can be confusing because I am curious but what I am must be brought into focus especially now in a clogged musical world. Finding your focus is essential.
My heart is a castle and the sand that fills the desert: is your heart a sand castle or is it rock to protect yourself from the desert sand?

It’s a play on the sand castle. My heart is in motion so after the wave maybe a castle is not anymore but the sand remains the same. We remain of the same substance of which we are made and we must build. Change is not about being different but about being better in some characteristics.
You talk about a sunset light on the city in the season when everyone watches the sunset light on the sea or in the mountains: do you like empty cities?

Very very much. I love the sea but I like urbanization, the metropolis, feeling life flowing in various places. In Milan I live in the center because I like the breath of the city and I never feel alone. I enjoy every moment wherever I am.
Is the moon always the lamppost of the world?

Yes. How can it not be. The lamp is nocturnal and it is the largest lamp we have. I look upwards, my favorite movie is Interstellar, I love astr physics, I am fascinated by what we are in the universe.
Ready to go to space with Elon Musk?

I would like!
Are we still a world disconnected from the future always in search of new scenarios and therefore always restless?

The world has been restless since before man. The earth is constantly regenerating, it is we who will disappear if we go on like this, we don’t have much time left. The earth can also become a ball of fire, a hard rock, however it remains but we must safeguard ourselves, we are fragile.
It is 10 years of Everywhere: are you having a party? Do you reprint it?

I don’t look too far back. I like the melancholy of some memories but I don’t like anniversaries and if I do something it’s for the people who follow me and I know they care. Everywhere it was an important album because it marked a moment in my life so I will find a way to celebrate it, besides we must also recover a meeting with the fan club.
How is your conquest of the Latin market progressing?

I’ve always done pop. The niche interests me for the quality. I don’t pay attention to numbers or fashion, as a principle I don’t make music for tik tok, then maybe I do something because it amuses me and I love to experiment. When I write and sing I have my range, I want that thing to have a certain caliber which doesn’t mean it can’t reach everyone. I have experienced everything in life but I fell in love with Pop, which as someone said is light only for the listener but not for the writer. For me it is a road that I have always looked at and I have perceived the connection. Laura Pausini’s Latin Grammy made me snap something more. I studied Spanish to communicate without mediation. The beauty of the Latin world is the contrast between complexity and simplicity; in Italy we often look to the North of the world and sometimes we overlook the fact that the Latin one belongs to us: yet in Italy there is little awareness of our Latin essence. How a melody strikes a thousand words do not strike: the word speaks to the brain, the melody to the heart and there is no competition.
In the end, can we say that it is clear what forever means?

I go back to America to work on new things and then the news will arrive to slowly unmask the album that is being born. An album today begins to tell even earlier, through singles.