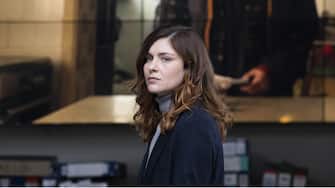 In do not leave me, Vittoria Puccini is Elena Zonin is a policewoman who lives in Rome where she deals with computer crimes and in particular with crimes against children following, with a passion, the investigations concerning the disappearance of minors. A new case, linked to an investigation she has been working on for some time, brings her to Venice, the city of her youth, from which she fled twenty years earlier. Here he will meet Daniele Vianello, his great love at the time who in the meantime became deputy police chief, and Giulia, his best friend whom Daniele then married.

Do not leave me is an Italian television series, consisting of 8 episodes, directed by Ciro Visco and produced by Rai Fiction in co-production with PayperMoon Italia. Together with Vittoria Puccini, in the cast of Alessandro Roja, Sarah Felberbaum, Maurizio Lombardi and Sandra Ceccarelli

Vittoria Puccini, on November 18, he turns 40. Discovered by Sergio Rubini, who wanted it in his comedy film in 2000 All the love there is, it was on that set that started his career. In his resume films such as Glance, All Freud’s Fault, Kiss Me Again, The Place And But when do the girls arrive ?, but also many TV series including Elisa di Rivombrosa, The Baroness of Carini, The whole truth, While I was away, The trial And The fugitive

WATCH THE VIDEO: Vittoria Puccini, the best roles she has played

All the love there is (2000) – The “baptism” in the world of cinema comes with All the love there is by Sergio Rubini. The film tells the story of three girls from the north, beautiful and uninhibited, who arrive in Puglia in the seventies, wreaking havoc among the young people of a sleepy town

The fugitive: the cast of the fiction with Vittoria Puccini. PHOTO

Elisa di Rivombrosa (2003-2005) – Directed by Cinzia TH Torrini, with Vittoria Puccini, Alessandro Preziosi, Kaspar Capparoni and Sergio Assisi. Kingdom of Sardinia, 1769. The young woman Elisa Barefoot is a girl of humble origins who works at the county castle of Rivombrosa as a lady from company of the elderly Countess Agnese Ristori, who adopted her when her father died. The countess is the mother of the handsome Fabrizio (Alessandro Preziosi). An overwhelming passion will be born between Elisa and Fabrizio

Vittoria Puccini: the beauty and elegance of a talented actress

But when do the girls arrive? (2005) – Vittoria Puccini is directed this time by Pupi Avati, who rewrites his youth forty years later, setting it to the present day and recounting the realities he loves: Bologna, jazz, virile friendship, good manners. In the film the actress plays Francesca

The Baroness of Carini (2007) – There series starring Vittoria Puccini alongside Luca Argentero, Enrico Lo Verso, Lando Buzzanca and Lucia Sardo. We are in Sicily in 1860. It is the story of the love that overwhelms a Sicilian noblewoman and her young lover. The miniseries is a remake of the 1975 TV drama The bitter case of the Baroness of Carini

Glance (2008) – Directed again by Sergio Rubini together with Riccardo Scamarcio, for this film Vittoria Puccini wins the Diamanti al Cinema award as best leading actress ex aequo with Violante Placido at the Venice Film Festival 2008. The film tells the rise in the art world of the young and ambitious sculptor Adrian, favored by a fifty-year-old art critic, Lulli, to whom Adrian blows his girlfriend

The Whole Truth (2009) – Television miniseries that aired for the first time in 2009, sees Vittoria Puccini in the role of Paola Pavese, a young lawyer married to the police commissioner Marco D’Elia (Filippo Nigro). But the problems begin when he meets the doctor Giulio Guidi and they become lovers, while Marco investigates the death of the doctor’s assistant

Kiss Me Again (2010) – In the film, sequel to de The last Kiss and directed by Gabriele Muccino, Vittoria Puccini is the protagonist next to Stefano Accorsi. After ten years of marriage and a child, Carlo and Giulia are a couple in crisis. He acts like he’s still single, while she has a new life with Simone, an actor. The film garnered 6 nominations for the Silver Ribbons and won the David di Donatello for Best Original Song (kiss Me again by Jovanotti)

All the fault of Freud (2014) – Film by Paolo Genovese, tells of a psychoanalyst abandoned by his wife with three daughters, each with her own problems in life and love. Protagonists of the film Marco Giallini, Vittoria Puccini, Anna Foglietta and Laura Adriani. Also in the cast are Alessandro Gassman and Claudia Gerini. The film received 2 nominations for the Nastri d’Argento and 4 nominations for the David di Donatello

L’Oriana (2015) – Vittoria Puccini is Oriana Fallaci in the miniseries by Marco Turco, which tells the life of one of the great protagonists of twentieth century journalism, with Vinicio Marchioni in the role of Alekos Panagulis. “I am softer, she more bumper. But I admire her because she pretended to be respected and considered as a woman, ”Puccini said in an interview

The Place (2017) – Also in this case Vittoria Puccini is directed by Paolo Genovese. A mysterious man always sits at the same table in a restaurant, ready to fulfill the greatest wishes of eight visitors. These, in turn, have to perform a task. No task among those that man goes to assign is impossible, but almost every one of his requests implies going against all ethical and moral principles. Puccini interprets Azzurra, that she must see to it that she destroys a couple if she wants her husband to fall in love with her again

The trial (2019) – Legal thriller set in the city of Mantua, tells of a chorus of characters that gravitate around a single, dramatic event: the murder of Angelica, a seventeen-year-old involved in bigger deals than her. There pm Elena Guerra (Vittoria Puccini) discovers that she is inextricably linked to the victim; for the lawyer Ruggero Barone (Francesco Scianna) the trial represents the opportunity of a lifetime. Everyone is walking on a razor’s edge: that of a process whose outcome will decide the new course of everyone’s life

While I was away (2019) – Directed by Michele Soavi, the tv series tells the story of Monica Grossi that si awaken after four months of coma without remembering anything about the last years of his life. With the help of Stefano, brother of her alleged lover, who died in mysterious circumstances, she tries to reconstruct her past and to find out if she is really the woman everyone says.

18 gifts (2020) – Film directed by Francesco Amato, with Benedetta Porcaroli and Vittoria Puccini, tells the story of Elisa Girotto, who dies leaving her husband Alessio and her newborn daughter Anna. Before she leaves, she writes a list of birthday and Christmas gifts for the little girl who will never know her mom. In 2021 the actress is nominated for the David di Donatello for Best Actress in a Leading Role for the role of Elisa

The Fugitive (2021) – The fugitive is a TV miniseries directed by Carlo Carlei. The life of Arianna (Vittoria Puccini) is turned upside down when her husband Fabrizio, councilor of a small town in the Turin area, is killed. A series of overwhelming evidence, and the suspicion that it is a crime of jealousy, they bring all suspicions to focus on her. But, before being arrested, Arianna runs away to look for the real killer