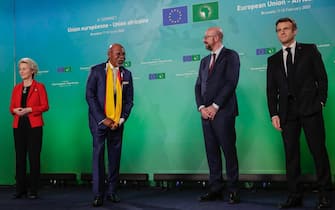 One unpleasant episode involved the president of the EU Commission Ursula von der Leyen during the EU-Africa meeting to Brussels Thursday 17 February. During the arrival of African leaders, the foreign Minister Ugandan Odongo Jeje he skipped the handshake with the number one of the European executive

In videowhich immediately went viral on the net, Odongo Jeje is seen arriving at the location for the usual photo with von der Leyen, the president of the European Council Charles Michel and the French premier Emmanuel Macron

Who is Ursula von der Leyen, the first woman to lead the EU Commission

Von der Leyen: “Italy’s economy is growing like never before”

G20 Rome, the announcement by Biden and von der Leyen: “A new era of cooperation between the US and the EU”

The French president Macron, after an initial moment of embarrassment and with Michel stopped on the spot, he motioned to the Ugandan minister, pointing to von der Leyen

At this point the Ugandan minister he turned around towards von der Leyen, addressing them a nod of the head and a few words

A similar episode had happened to the president of the EU Commission ad Ankarain April 2021. In that case the Turkish president Recep Tayyp Erdogan he had invited to sit on the sofa alone Michel. Hence the episode had been renamed “Sofagate”

In Ankara no one intervened. Eventually, the Ugandan minister left the photo booth without shaking hands to von der Leyen