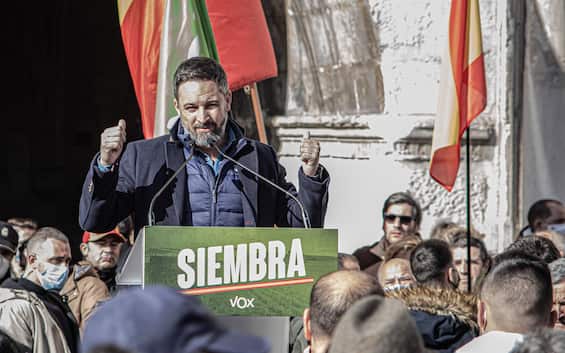 “I hope that our victory will pave the way for Vox’s success in Spain”, so the leader of the Brothers of Italy Giorgia Meloni had declared in an interview with the Spanish agency Efe, sparking the reactions of the Italian center-left a few hours after the vote for the political elections in Italy. (ELECTIONS: THE LIVEBLOG – THE SPECIAL). But what do we know about this Spanish political formation?

After Giorgia Meloni’s statements, no comment came from the Spanish side. Among the most recurring themes in Vox’s political discourse are the defense of “the unity of Spain”, the opposition to the decentralization of public administrations, the contrast to “asymmetrical” gender policies and the Western “climate agenda”, tough stances on migration issues, support for anti-abortion and anti-euthanasia currents, support for ultra-liberal fiscal measures and for the benefit of “large families”, the promotion of bullfighting traditions such as bullfights. Current third force in the Spanish Congress of Deputies, with 52 seats out of 349, Vox has acquired increasing leadership in the last five years. The first major electoral success came – surprisingly – with about 11% of the Andalusian regional governments in December 2018, followed by 15% of the policies in November 2019, the raid on the Catalan Parliament in February 2021 and its result so far more fruitful, harvested exactly one year later: an abundant 17% obtained in Castile-León, which allowed him to enter a regional government for the first time, in coalition with the Popular Party (PP). A little more than a year after the expiry of the current legislature, most polls consider the formation to be always largely capable of competing with the PP for part of the right-wing electorate, although some note a slight decline, with voting intentions ranging between about 10 and 15%. In view of the 2023 generals, both PP and Vox for the moment avoid taking positions in favor or against a post-electoral alliance.

At the origin of its genesis (2013) there is the impulse of splitting wings of the PP, active in particular in Catalonia – in conjunction with the explosion of the secessionist movement – and in the Basque Country. The leader of the formation comes from this last territory: belonging to a family victim of hostile acts by the ETA, Santiago Abascal was raised politically in the ranks of popular youth, as told by Vox SA, a recent book on the party by journalist Miguel González. Instead, he is linked to the Spanish Falange of the Jons, a movement clearly inspired by Francoist forces, the past of Jorge Buxadé, vice president for the political area of ​​Vox. The recent words about the alliance with Fdi are from him: “I am very happy with how the electoral process is going in Italy, with what the polls are saying”, he said on 29 August. “Without any doubt Giorgia Meloni’s Brothers of Italy is a party friend of Vox, a party with which we have been collaborating permanently for years”, he added. “It will be very positive for Italy and for the whole European Union that the Brothers of Italy obtain the presidency of the Italian government”.