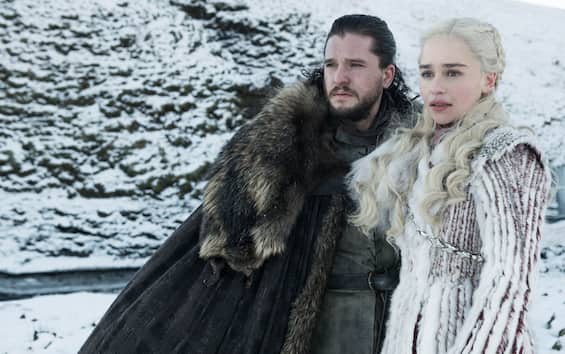 Fans de Game of thrones – game of Thrones have begun the countdown until August 22, when the prequel will start airing House of The Dragon. The series, consisting of ten episodes, is set 200 years before the events narrated in the mother series and will focus on the history of the noble family of Targaryen. A dynasty that we got to know mainly thanks to Daenerys and which will now show the many ramifications of her family tree. The series will debut exclusively on Sky and streaming only on NOW, absolutely simultaneously with the airing of American cable TV. In the meantime, here are the episodes of Game of thrones review to review the history of the Targaryens.

To restart the review of the history of the Targaryens it is good to start from the very first episode of game of Thrones, when the character of Daenerys is introduced to us. The Queen of Dragons is the main character of the series, through which the story of this house is told. In the first episode of her we also meet her older brother, Viserys. Ruthless and obsessed with the throne, he forces Daenerys to marry Khal Drogo, leader of the Dothraki. A move that Viserys believes can help him regain possession of the Iron Throne. On the occasion of the wedding, Daenerys is presented with books by Ser Jorah Mormont and some petrified dragon eggs by Magistro Illyrio Mopatis, nobleman of the free city of Pentos linked to the Targaryen House.

The tenth and final episode of the first season is also significant. Daenerys, shocked by the loss of Drogo and the child she was expecting, has a tall funeral pyre built into which she throws herself into her without showing pain. The next morning, Ser Jorah finds the girl again unscathed in the ashes, with three baby dragons clinging to the body. An intense moment, which marks the birth of the Queen of Dragons.

Another important episode to learn more about the history of the Targaryens is the first of the third season. Daenerys is looking for an army and considers purchasing the army of slaves called the Unsullied. While she talks to Jorah, the Dragon Queen is lured by a little girl, who is later revealed to be a killer. Dany is providentially saved by Ser Barristan Selmy. This character is very interesting: he asks Daenerys for forgiveness and also asks her to be able to become her Royal Guard of hers, in order to serve the king’s daughter (Aerys II known as the Mad King) that years before he had failed to protect during Robert’s Rebellion.

Game of thronesthe episode The battle of the bastards

In the ninth episode of the sixth season we see allmeeting between Daenerys and Tyrionwho to appease the fury of the Dragon Queen reminds her of her father’s madness and reveals the real reason why Jaime killed the Mad King.

Game of thronesthe episode Rock of the Dragon

The first episode of the seventh season is also significant, when in Dragon’s Rock, Daenerys returns to the fortress ancestral of his family for the first time since his birth. On this occasion he removes the banners of Stannis Baratheon and takes possession of the island.

The last episodes of the eighth season of game of Thrones they are very significant. Jon Snow confesses to Daenerys her true origins and her real name, Aegon Targaryen. He too, therefore, is a member of the family and the first heir to the throne by birthright.