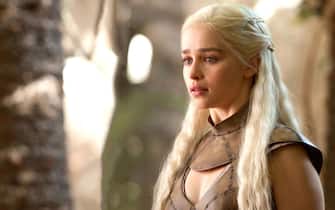 House of the Dragonbroadcast on Sky Atlantic channel 110 of Sky starting Monday, August 22, is based on the novel Fire and Blood by George RR Martin. The story predates the vicissitudes of Daenerys Targaryenplayed by Emilia Clarke neither Game of Thrones – Game of Thrones. She is the daughter of Aerys II Targaryen And Rhaella

Neither Game of thrones, Daenerys Targaryen makes a long journey towards the conquest of the throne, discovering in the course of the episodes that he has the power to control the dragons.
Forced by her brother Viserys to marry the lord of the Dothraki, Daenerys Targaryen becomes the queen of the great tribe, “khalasar”, of her husband

Khal Drogo is evil and Daenerys Targaryen fears him until she learns his language and, as she learns about him, she discovers she is in love with him. She then gains power and respect, but due to an injury, Khal Drogo falls ill. Daenerys is forced to kill him because he is the victim of a ritual that made him catatonic and killed her child that she had in her womb. She throws herself into the fire too but she survives and her three dragon eggs hatch

Daenerys Targaryen, hired to lead Khal Drogo’s khalasar, wanders with the rest of the tribe until she is welcomed to the city of Qarth. Here, she finds lodging with Xaro, a member of the Thirteen, to whom she appeals to help her invade Westeros. She doesn’t get what she asked for and her dragons and warriors are halved by the sorcerer Pyat Pree, who wants her powers of her. She victim of a spell in her Daenerys temple, she orders her dragons to burn the sorcerer. She breaks free and collides with Xaro, her ally with one of her servants. She will make them both die of starvation

House of the Dragon, the photos from the premiere in Los Angeles

Daenerys Targaryen buys a ship and reaches Astapor, where a Qarth hitman wants to kill her. Here she deals with the purchase of an army of eunuchs in exchange for her dragon bigger than her, which she then asks to kill the slaver. She frees the eunuchs, who then choose to become part of her army. Together with them she goes to Yunkai, where, however, the chief of the mercenaries enchanted by her beauty decides to desert her orders and to swear allegiance to her. So together they also liberate the city of Yunkai from the slavers

Daenerys Targaryen continues her march and also frees the city of Meereen, acquiring its power. She decides to sentence the former masters of the city to death and chooses to stay in that city when she discovers that her Council has been overthrown in Astapor and slavery has returned to Yunkai. In Meeren she begins a relationship with Daario, who is sent to win back Yunkai

The cast of the 8 seasons of Game of Thrones. PHOTO

House of the Dragon airs on Sky from 22 August. Previews and photos

After a series of rebellions against khal Moro, Daenerys Targaryen is sentenced to death. She manages to escape, sets fire to the temple and kills all the khals, thus earning the favor and loyalty of the Dothraki. Together with them, her dragon and her Daarius march in the direction of the besieged Meeren. Daenerys Targaryen orders her dragons to set fire to the ships in port, seizes the remaining ones and recaptures the city

House of the Dragon: everything you need to know about the TV series

Daenerys Targaryen returns to Dragonstone, her homeland, and regains control of the fortress. Here, after some ups and downs, Daenerys Targaryen helps Jon Snow defeat the White Walkers, allowing them to extract obsidian from her quarries. After several battles won by Daenerys Targaryen, she and Jon Snow, getting closer and closer, leave for White Harbor. They are oblivious to the fact that he is, in fact, Aegon Targaryen, grandson of Daenerys and rightful heir to the throne she wants to conquer.

Arriving in Winterfell, Daenerys Targaryen clashes with the White Walkers and learns from Jon that he is the rightful heir to the Iron Throne. Daenerys Targaryen fights against Cersei but overcome by the madness that grips her family, in addition to killing her enemies, she exterminates thousands of innocent people: she can reach the Iron Throne. Jon tries to bring her back to her reason but in her Daenerys of hers emerges the tyrannical side of her and, realizing there is nothing else he can do, Jon stabs her in the heart of her. Daenerys’ dragon, seeing her dead, melts the Iron Throne and takes away her corpse

Emma D’Arcy she was hired to play Rhaenyra Targaryen as an adult. She is the eldest daughter of Viserys and dreams of becoming the first queen of the Seven Kingdoms

As a young man, however, Rhaenyra Targaryen has the face of Milly Alcock

In House of the Dragon there is the character of Daemon Targaryenyounger brother of king Viserys and uncle of Rhaenyra. He is portrayed by Matt Smith

In addition to being one of the heirs to the throne, Daemon Targaryen he is a skilled and reliable warrior

Among the other characters who bond with the Targaryen family is there Lady Alicent Hightower, known as the most beautiful woman of the Seven Kingdoms. She has the face of Olivia Cooke

Lord Corlys Velaryon he is the most famous navigator of Westeros, known as “The Sea Serpent”. He is portrayed by Steve Toussaint

Ser Otto Hightower is the father of Lady Alicent and the greatest political rival of King Viserys I. He has the face of Rhys Ifans