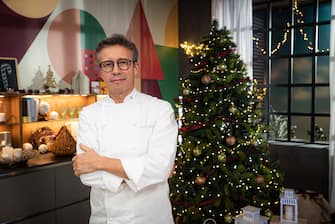 Andrea Besuschio approaches the art of pastry late, considering that pastry has been his family’s business since 1845. When he joins the company he is 21 years old and his first role is in the commercial branch, thanks to his studies in accounting. . Only 7 years later did he feel the desire to enter the laboratory.

Luigi Biasetto is a famous Italian pastry chef, born in Brussels but of Venetian origin. He currently owns two patisseries of the same name, the Biasetto pastry shop in Padua, opened in 1998, and the one in Brussels, opened in 2008.

Maurizio Bonanomi is a leavened dough artist, owner of the Pasticceria Merlo di Pioltello a few kilometers from Milan. Brianzolo di Albavilla (Como), Bonanomi has been dismantling and reassembling his panettone for five years to do better and better. And this rigor can be found all in his wonderful panettone, a hymn to the truest craftsmanship.

The promo of Artisti del Panettone

Francesco Borioli, an environmental engineer seduced by leavened products, works and creates in the artisan laboratory (in Stallavena, in the Veronese area) of which he is founder together with the partners Elisa Delle Pezze, Luca Dal Corso and Daniele Massella

For Cantarin it all began by chance, after graduating as a waiter at the hotelier in Castelfranco Veneto, he became increasingly interested in the fascinating world of pastry

The pastry chefs, stimulated by the host to exhibit their personal vision of the pastry, during the preparation of the dessert will provide ideas and confectionery curiosities and above all indications and suggestions for the realization of the dessert at home (in the photo Giorgio Facchinetti, flair bartender)

Stefano Laghi’s career is structured on an articulated training path and on a mixture of important professional experiences that have led him to achieve a 360 ° preparation. He wants to be called Trainer because that of training professionals in this sector is the spring that moves his path, always in search of the ideal ways to explain the art of pastry.

Alfonso Pepe enters the world of pastry with professional experiences in tourist resorts of Italy. A world to which he immediately feels he belongs, improving himself more and more by attending prestigious schools such as Etoile and Cast Alimenti.

Paolo Sacchetti was gold medal for the best spring cake (the Fagottino), in 1998 decorated for the best single portion (Pesca e Pera), in 1999 for the best tart. In 2005 he was recognized as excellence in the creation of puff pastry, for which he is still the undisputed master today.

From the Amalfi Coast, Sal De Riso with its innovative desserts it has reached every corner of the globe. Is called Salvatore De Riso but everyone just knows it as Sal, so much so that he made this abbreviation his brand.

Vincenzo Tiri, born in 1981, is one of the major Italian leaveners. Son of art, he grew up in the family laboratory among mother yeast, flour, eggs, butter and sugar and from an early age he approached the art of leavening following in the footsteps of his greatest masters: grandfather Vincenzo and father Michele.

Son of fourth generation pastry chefs and with a strong international curriculum behind him – from Paris to London, from Singapore to Venice – Andrea Tortora was for years at the helm of the pastry shop of the St. Hubertus restaurant, earning his third Michelin star as chef in 2018 pastry chef.

Determined and very well prepared, Carmen Vecchione founded her Dolciarte and made it a small mecca for gourmands. His panettone is very famous, including Panramata, with coppery Montoro onion.

The story of Vincenzo Santoro begins in Puglia, but it is in Milan that it comes to life. The Milanese city welcomes him with open arms and gives him the opportunity to become someone in the white art: he will be among the masters of panettone and from his pastry shop great talents will emerge, destined to make a name for himself on the world scene.